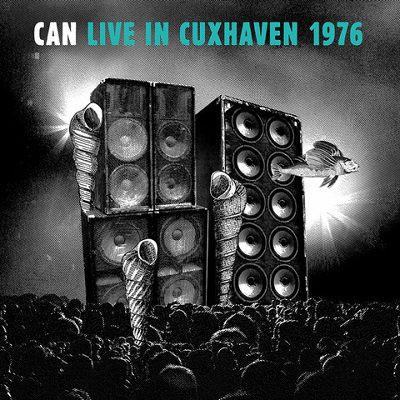 When it comes to getting down to business, you know something is about to crawl up your spine to dive into the world of those insane textures that aren’t just jam band quality. Think about it, do you want to hear the same quality that Umphrey’s McGee, Widespread Panic, and Gov’t. Mule might have been doing 30-minute improvisations of putting audiences to sleep at times? I don’t think so.

Not to put them down, but there comes a time where you need to take a bit of a break of cutting it down from 30 to 15 minutes of a jam session. But when it comes to a band like CAN, brother, you have no idea what you’re about to explore. This here is the next continuation of the live series from the band’s archive.

From Stuttgart, Brighton, and now in Cuxhaven, Germany in 1976 at the peak of the punk movement, these four tracks see the quartet (Karoli, Czukay, Liebezeit, and Schmidt) getting the jamming grooves in an attitude that is like a ball of energy, being unleashed to the public.

Cuxhaven is an independent town in the northernmost point of Lower Saxony. It is known for the gateway to the UNESCO World Heritage site, stunning landscapes of near-white sand beaches, mud flaps, and the gateway to the Wadden Sea National Park. The reason why the Cuxhaven sea is so beautiful, when those tides come out, you can walk up about 20 kilometres across the seabed.

For a band like CAN to perform there, they make the alternate score to the seas so beautiful, intense, and right in front of your very eyes to witness those beaches coming to shore. Now I can’t recall if the band were promoting either Landed or Flow Motion release, but listening to this recording, you can tell that the band are revisiting their time with the United Artists label during the peak of the Damo-era.

Karoli plays these extended versions on ‘Zwei’ as if he’s continuing where ‘Oh Yeah’ had left off from the Tago Mago album, giving Irmin and Jaki a chance to walk into the mid-fast tempos where Damo scatted and did these intense vocal lines to send shivers down the spine. You can imagine more of the pieces from their second album is like a semi-sequel to the grooves as the quartet have more carte blanche by taking a trip into the Egyptian desert, with some intense heat.

‘Eins’ opens the performance of CAN, walking into the territories of Sly and the Family Stone’s improvisation with some spaced out atmospheres that Irmin does on his keyboards to create that hypnotic effect for Michael to lay down some wah-wah grooves before Holger channels the sounds of Joseph “Lucky” Scott from his work with the late, great Curtis Mayfield’s sessions to the Super Fly soundtrack.

CAN really have some knowledge of their soul/R&B arrangements. And to have that brutal fuzztone effect with the funky chicken, you can just imagine how much both of those two had a huge impact on the band’s sound. They proved themselves that they’re more than just a krautrock band, more than alumni’s to controversial composer Karlheinz Stockhausen, but dancing to the music with a brutal attack on the senses.

Just as the first two revisit the Blaxploitation sounds and the Tago Mago period, ‘Drei’ is where the soup itself gets red hot. And you might just need to add a shit load of spices into the mix. The band go into this frenzy attack with Holger and Jaki adding more enough coal to the engine inside the train as they speed it up.

Now I can’t tell if it’s either Czukay or Karoli doing all these scatting effects. But Michael lays down some clean-cut textures, but adding the Lou Reed-sque vibes for a brief moment, channeling Metal Machine Music for a brief moment. The closing track ‘Vier’ is where the audience joins in on the fun to clap along to the beat from the rhythm section in a reggae-like tone with swirling, hay-wiring effects that Irmin comes up with on his instruments to swoosh back and forth to the beat.

When you put on a CAN album, you are in a world where your mind takes you into this whole other universe where it’s menacing, extreme, and right in front of your face. The continuation of the live recordings are a treat to hear more of the quartet’s mid-70s time period to see how much they were ahead of the ball game.

And can (no pun intended) we expect something from the archives of hopefully the Damo Suzuki years? Let’s just cross our fingers. The first three volumes of the recordings are like finding more diamonds in the rough.