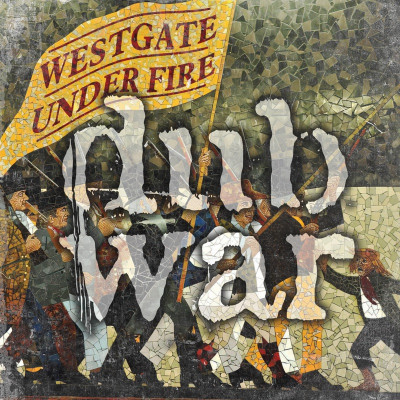 Westgate Under Fire by Dub War

Dub War blazed a trail way back in the mid 90s with two celebrated albums in Pain and Wrong Side Of Beautiful that saw the Newport band combine reggae, hip hop, metal and punk to furious effect. Dub War were always a forward thinking band with their music and the Step Ta Dis remix album featuring remixes of Dub War tracks by the likes of Bonobo, DJ Rap and Aphrodite further merged the metal and electronic scenes and it seemed as if they were going to even bigger things as they were also gaining traction as a formidable live act, with lead singer Benji Webbe proving to be an outstanding fromtman time after time.

It wasn’t to be however and following label troubles, Dub War sadly split at the end of the 90s. Even though they weren’t round for that long a time, the band definitely burned bright and anthems like ‘Strike It’, ‘Enemy Maker’ and ‘Million Dollar Love’ still sounded vibrant and fresh even today but it seemed for a long time like Dub War would remain a 90s cult band, seemingly unfairly overlooked.

Webbe (and initially other members of Dub War) went onto front festival mainstays Skindred who gained a large amount amount of success with a series of well received albums and whose live shows  always gaining mass plaudits. Surprisingly though, Dub War got back together for a few shows in the mid 2010s and further surprised and delighted fans by announcing a brand new album. The results of this reunion are the songs that make up Westgate Under Fire, the first new Dub War album in over a quarter of a century.

Kicking off with the incendiary ‘Black Mannn’ (inspired by the murder of George Floyd and the protests that followed) is a hell of a way to start any album off and announced that Dub War are back and mean business and from then on in, it’s a fiery and eclectic return that sees Dub War sounding just as explosive as they did when they were first around.

A cover of ‘War Inna Babylon’ by Max Romeo and The Upsetters with a guest appearance (his last ever) by the late, great Ranking Roger follows and the energy gets bigger and bigger with third track ‘Vibes In The Place’ being extremely aptly named.

The vocals of Webbe sound both flawless and timeless and Jeff Rose on guitar and bassist Richie Glover also put in fine performances throughout. In an interesting move, alongside drummer Mikee Gregory, there are a series of guest drummers who add different flavours to the songs they feature on the album among them Mike Bordin (Faith No More), Spike T Smith (The Damned), Roy Mayorga (Ministry/Amebix/Nausea) and Jamie Miller (Snot/Bad Religion) and this makes the album even more eclectic sounding.

The album is a non stop mash up of the different styles that Dub War are known for and tracks like ‘Bite Back’, ‘Get Back Up’ and the Al Green cover ‘Stay Together’ in particular sound massive but the whole album is a triumph and packed with so many vibrant styles and anthems.

Westgate Under Fire is a fine return for one of the 90s UK alternative music scenes best and most vibrant bands and hopefully Dub War will have more under their sleeves too as it is great to have them back and firing on all cylinders once again.