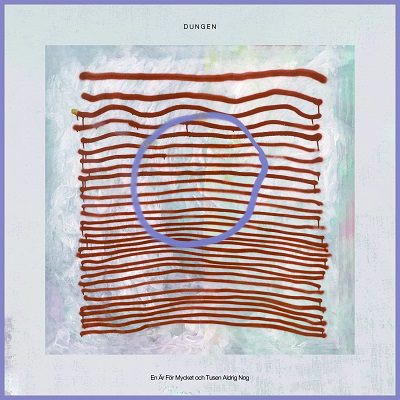 Dungen has always kept listeners on an adventure that’ll make you want to be a part of the band’s legacy. Since their formation in 1999, Gustav Ejstes the frontman behind Sweden’s psychedelia undertaking, he wants to make sure that each of the band members have their engines, up and running.

The band’s latest album En Är F​ö​r Mycket och Tusen Aldrig Nog, is Dungen’s first record since their 2016 H​ä​xan, and their first proper studio release after their seventh release Allas Sak. I first became aware of Dungen’s music after hearing one of their tracks on Sid Smith’s Podcasts from the Yellow Room years ago when I was in College.

You probably may know him as an expert on King Crimson, and his incredible book about the band entitled; In The Court of King Crimson: An Observation Over 50 Years. His podcasts introduced me to interesting and subliminal music. Raging from William D. Drake, Elephant9, Grand General, Sonar, Strawbs, Mumpbeak, and of course, Dungen. One of the tracks that he played on a previous episode back in 2011, was from their sixth release Skit i allt.

It was quite an intriguing yet atmospheric beauty with a surrealistic-pop orientation that had a lifting effect. And it caught my attention after that on Sid’s podcast. Then, I had completely forgot about Dungen. Until their new album. And it made me want to go back to see what I was missing from them.

On En Är F​ö​r Mycket och Tusen Aldrig Nog, Dungen return back to the rave-ups with soft, fuzzed-out grooves and cosmic voyages that await you. The bright Vince Guaraldi-like approach turned sunshine midsection, with a trip-hop twist on ‘Klockan Slår Den Är Mycket Nu’ will make you remember the fond memories you had as a child with a ‘Feel Flows’ approach until the very end.

‘Skövde’ kicks the album off with an electro drum beat, followed by piano and a train-chugging acoustic guitar as it takes listeners to the next stop with a bright arrangement from Fiske’s arrangements. ‘Om Det Finns Något Som Du Vill Fråga Mig’ brings a sense on the views of losing a loved one.

Ejstes gives Holmegard carte blanche as he pounds his anger, sadness, and grief on his playing while Fiske and Mattias come in to bring Johan back to Earth and take the next flight that awaits them. ‘Nattens Sista Strimma Ljus’ has a very interesting combination between David Bowie’s ‘The Man Who Sold The World’, The Amorphous Androgynus, and R.E.O Speedwagon’s ‘Heard it from a Friend’.

Fiske brings out the climbing ladders, one by one, and adds a bit of a heavier backdrop whilst Johan goes for some hardcore beats with tambourines flying across our galaxy. Both the Hammond Organ and Mattias’ bass, goes for a futuristic jazzy approach for a spaced-out groove for the ‘Möbler’ to come forth.

As Fiske and Johan go into this countdown for Gustav’s keyboard collection to go on Dungen’s rocket ship, the sound moves into the styles of Gong’s Flying Teapot trilogy with Bo Hansson handling the production levels with organ flares for Daevid Allen’s Zero character to go on an extended adventure that awaits him.

‘Höstens Färger’ has a great vibe that Gustav, Johan, and Mattias do after Fiske takes a break for his fingers to relax as Dungen become a trio in the piece. Not only there’s the Canadian Prog-Pop sounds of Klaatu, Gracious, Jane Weaver, and Jeff Lynne’s arrangements, but it’ll make you think of the records from Andy Votel’s label, Finders Keepers.

Dungen have really shown how far they’ve come for the past 23 years. The new album is filled with mystery, questions, and unexplained answers that is up for the listener to decide if they’re ready to answer or not. But here, it is a fascinating wonder that we’ve explored, right from the very beginning.