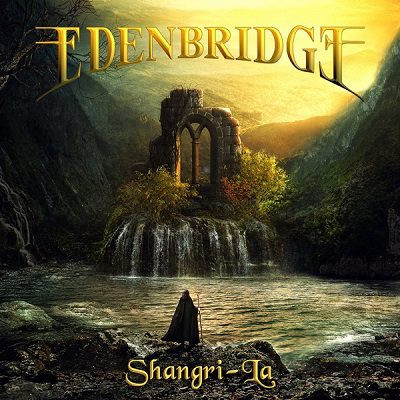 From the moment the opening fanfares began with ‘At First Light’, there’s a glimpse to combine Jeff Wayne’s musical version of The War of the Worlds, Stefan’s galloping bass to channel Yes’ Chris Squire, Stockhammer and Jungreithmeier’s duel between drums and epic riffs, followed by Sabine’s angelic vocal lines, it gives Edenbridge a chance to go into the war of all wars.

For nearly 24 years and various line-up changes, Austrian’s own answer to both prog and symphonic metal, Edenbridge have been leading the charge of combining stories, powering arrangements, and orchestral structures that’ll make you want to reimagine those songs as an animated 2D metallic opera, that’ll knock Disney off the ball park.

For Sabine Edelsbacher and Arne “Lanvall” Stochammer, who are the two constant members of the band, have kept the fires of Edenbridge’s music, burn brighter than ever. Through good, bad, and personal losses, they refuse to back down without a fight.

Their 11th release Shangri-La, follow-up to 2019’s Dynamind, is the band’s first album under the AFM label. This is a unique release that showcases the band with enough ammunition that’ll hit your heart really big. Last year in November, they announced a crowdfunding campaign for fans to be a part of the new album.

This was going on around the time that the lockdown came shortly before the band were preparing their planned European tour. On the details for the campaign, you can have your name in the booklet, personal dedication, guitar strings signed, personal audio messages, Skiing day with Lanvall in Austria, dinner with the band in Linz, or get credit to be an Executive Producer on Shangri-La.

Those are big choices to be a part of Edenbridge’s epic journey. And the highlights on here are worth checking out. ‘Freedom is a Roof Made of Stars’ has this interesting crossover between Thrash-like riffs, symphonic horn sections, melodic watery twists, and tones of Kayak’s ‘The Sword in the Stone’ from their 1981 gem, Merlin.

Then, they reach upwards to the mountains with acoustic textures while Sabine reaches the peak with her teammates to witness the Sun rising up in all of its glory. ‘The Call of Eden’ has a striking late ‘70s, early ‘80s arena rock vibe with an earlier pop orientation. It’s quite intriguing for the group to branch out and prove themselves they’re more than just a power metal band.

But it does speak of Steve Augeri’s time with Journey from their 2001 release, Arrival. However, it keeps the wings floating to unknown worlds, wherever the band flies to. Next, they row for a gentle, quiet float across the stream with a folk-like fantasy structure before walking into these Gilmour-sque textures across the ‘Savage Land’.

Across the horizon, they prepare themselves to walk into the Mother Earth-era from Within Temptation’s territory with a thunderous powder keg on ‘Somewhere Else But Here’. The five-part epic, ‘The Bounding (Part 2)’, closes the album by continuing where the first part of the original story had left off from their 2013 eighth studio album. You can tell that the entire narrative needs to be told in a graphic novel, or as I’ve mentioned earlier, a 2D animated movie, big time.

When you listen to both Part 1 and Part 2, you can feel the tension cut with a knife. There’s the intensive arguments (‘Alpha and Omega’) with heat gaging drums, keyboards, and chord progressions before the strings and orchestral sounds go in for the attack setting up this time clock, ready to go off at any second (‘The Eleventh Hour’).

And just as everything is getting ready to break loose, the heavenly choir sets up the calm and coolness between the two relatives as they fly them across their kingdom to bring peace across the land. For Erik Martensson (Eclipse, W.E.T), he does one hell of a job sharing a duet with Sabine once more.

He originally appeared on the first part of ‘The Bonding’ ten years ago. And for him to come back, it shows how much appreciation they have with each other. It’s not just a band, but a metallic family to bring the story in full.

Shangri-La is Edenbridge’s flagship. It has the ability to have everything with an immersive description to prove themselves that they can come back, stronger than ever!