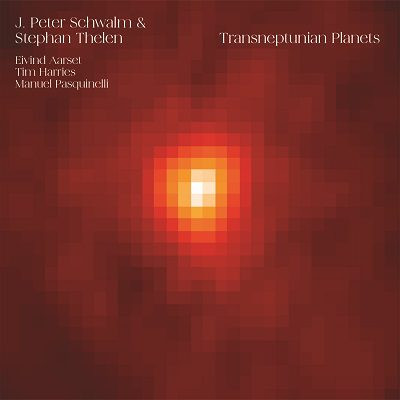 It’s been a while since I heard something from the RareNoise label. Maybe years, months, who knows? But it’s time to delve into the waters once more as we head towards Pluto that’s beyond our solar system. This also is the first collaboration between J. Peter Schwalm and Sonar’s Stephan Thelen as they prepare to create this dangerous landscape, throughout the cosmos.

Transneptunian Planets is their body of work as a team. They were both given free-rein on how much to transform and mutate with each other’s contribution. And to be allowed to have Norwegian guitarist Eivind Aarset, Earthworks bassist Tim Harries, and AKKU Quintet founder and drummer Manuel Pasquinelli to the field, they know that this was going to be a collaboration, they’ll never forget.

The 11-minute terror of ‘Quaoar’ has a brutal attack of craftsmanship from the shrieking overtones and Manuel’s complex rhythm that Schwalm and Stephan would create this monstrous fill, not knowing when help will come across this abandoned spaceship. Meanwhile, the opening track ‘Pluto’ gives us a sense on a horrific incident that occurred as the ensemble makes this brutal response on what just happened on the Kuiper belt.

On ‘GongGong’, the inmates began to take over the asylum. You hear the vicious slaps that Tim does on his bass. He hits them so hard, the strings would go bat shit crazy. Not to mention the vocalisations paying nod to Damo Suzuki. But for Harries and Thelen, they start to take jabs with one another. They began to take this competition on who will become the new ruler of the mental institute.

Then, Stephan creates these rain drop effects with a bright epic sound between Schwalm and Pasquinelli for ‘Sedna’. They start to take evidence with industrial flames, not knowing when the alien life form will ever come back to Pluto.

Throughout the languish elements of time and space, ‘Orcus’ becomes a complexing drone that Schwalm envisions on the other side of the field. He becomes a detective, searching for more missing clues for Harries to pick up the pieces on where the killer had left behind.

‘Eris’ closes the album with a strong sense of returning home, basking in a mournful organ atmosphere, hinting that the journey to the mysterious planet, will be a giant scar on the band members back, for the rest of their lives. This album is not only a challenge, but a daunting and enormous release that’ll prepare you to embark on a voyage with frightening results.