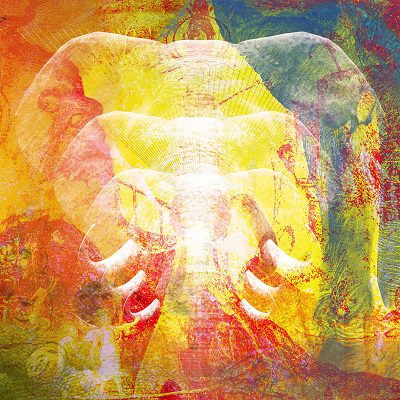 Elephants in Autumn Rage by Join The Din

Formed in London in 2018, Join The Din are a UK jazz contemporary ensemble. Double sax’s, bass guitar, and double the drums, you can’t go wrong with that. And we ain’t talkin’ about those whiny bullshit sounds from Kenny G, we’re talking about a real motherfucking band that’ll bring the attitudes of the WorldService Project as a ticking time-bomb waiting to happen.

Elephants in Autumn Rage is the band’s follow-up to their sole self-titled 2018 debut, and it’s a real crackerjack! From the explosive turned galloping horse ride into battle on ‘Get the P.I.G.S. Out (HIYM)’ to a crazy call-and-response from synthesisers and sax’s on the ‘Moodu Malhai’, you’ll go batshit crazy for Cawood’s bass, jumping from one building to another as if he’s Spider-Man with a bossa-nova, fusion-like twist.

Then at the end, it becomes an atmospheric dream before waking up in the Tropicalia sun. ‘Blunt’ will make you think of the ‘70s Blaxploitation films from Superfly, Coffy, Foxy Brown, and the Giallo film from Dario Argento, Prodondo Rosso. You can tell that Join the Din are channeling the styles of Curtis Mayfield and Goblin,  turning their music it into a big, giant massive joint to smoke, 24/7.

Meanwhile, Charlie brings out the big guns for the doubling sax’s for Rich and Ronin as they go in for the kill with Emanuela and Riccardo to run like hell on ‘Get Lost’. You feel as if you’re running in the middle of the hottest part of the summer in the middle of the emerald forest whilst going inside Captain Beefheart’s brain in the midsection as they create this dangerous tightrope in front of our very eyes.

Not only they pay tribute to Don Van Vliet, but Coltrane, the horn section from Magma, King Crimson’s Mel Collins, and Lol Coxhill, rolled into one. The percussionists have created this massive tidal wave for the doubling sax’s travel into this mystic cave, witnessing the disturbance and sinister approaches inside a gallery that has been there for centuries on ‘Enter’.

Now wait just a minute, what the hell’s going on here in the next track? On the ‘Red Room’, Join the Din go into the video game score on a loop of the ‘Underground Theme’ in the original 1985 Super Mario Bros. game from Nintendo. Adding bits of the Faust territory and snake charmer music, the sax section begins to hypnotise the cobra to come out of the wicker basket and revealing himself in a droning effect from the Hammond Frankenstein.

‘Rogue Planet’ returns to the samba groove once more, but this time with a swinging effect. This time, they channel Jono El Grande’s Melody of a Muddled Mason as Cawood transforms himself into a conductor as he leads the ensemble by giving them directions on where he wants them to go.

Crazy, wacky, and right in your face, Elephants in Autumn Rage is the ultimate jazz album that we need for 2022. And for the Bad Elephant label, they got the giant cannonballs, up and running for the next attack that awaits them.