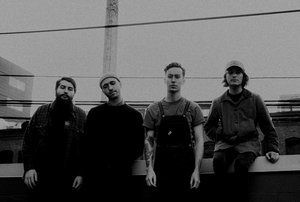 With this second record, I wanted to get weirder and heavier, while also maybe sounding more shoegaze than before.

With their latest album In The Interim, Salt Lake City’s No Sun combine shoegaze with heavier passage to create vast soundscapes that are filled many emotions. Gavin Brown caught up with guitarist/vocalist Jordon Strang to hear all about the making on In The Interim and the evolution of No Sun as well as shoegaze, alternative music in Salt Lake City, covering the Dead Kennedys and more.

E&D: Your new album In The Interim is out now. Was the creation and making of the album a smooth process?

Jordon: Absolutely. When we went into the studio with Zac Montez, we purposefully entered the session with about 90% of the record done. We knew Zac was a really creative engineer that would bring lots of cool ideas and sounds to the table and wanted to leave room for a “whatever happens happens and that’s how it’s going to be” type feel in certain parts. He had a lot of really cool and creative ideas for textures and sounds that otherwise wouldn’t have made it on the record had we worked with someone else. He uses the console like an instrument, which was largely inspiring to me. When we were recording we just gelled and had a lot of studio magic moments where things just perfectly fell into place.

E&D: You released the tracks ‘In My Heaven’ and ‘Near To Me’ from the album, ahead of its release. How have both of those tracks gone down so far?

Jordon: It seems like the reception has been really positive so far. Collaborating with Bobby Markos and Katy Viola on those music videos was an extremely cool opportunity as well so we were definitely excited to get those out in the open.

E&D: Do you feel that those tracks best represent In The Interim and where No Sun are are musically right now?

Jordon: Yes and no. Thematically the lyrics to ‘In My Heaven’ touch on the overlying concept of the record and it sonically covers a lot of ground that we explored. The record overall has plenty of darkness within it while ‘Near To Me’ is perhaps our lightest feeling song. We definitely left some easter eggs on the record for the listener to find when the album drops though.

E&D: What were the biggest influences on the sound and vibe of the new album?

Jordon: The heavy gaze scene has definitely blown up in a huge way in the past five years, which has been really cool to see. There’s a ton of new bands out there that are super inspiring and absolutely killing it. When we wrote and recorded If Only. I was really just beginning to dip my toe in to exploring this type of sound from a heavier background. With this second record, I wanted to get weirder and heavier, while also maybe sounding more shoegaze than before. I was listening to My Bloody Valentine’s “mbv” record in near constant rotation while writing a lot this album. I found the strangeness of that record extremely influential to my own sound. There are some melodies and song structures on that album that are really out there, and I truly feel like that record is criminally slept on. I wanted to try to achieve textures that I wasn’t hearing on other modern shoegaze records, while touching on a psychedelic feeling without emulating a psych rock sound. I would also have to say that artists like Harold Budd, Valium Aggelein, and long rural mountain drives while listening to Low’s Long Division played a pretty big role as well.

E&D: You have brought out a video for ‘Near To Me’. Can you tell us about the video and what the song is about?

Jordon: The song itself is a long distance love song. My partner and I live on opposite ends of the world for parts of the year and this song was essentially about the longing that type of situation creates while reflecting on the security I find in their love. Regarding the video, we had all been fan’s of Katy Viola’s work for ages and knew a collaboration was paramount, it was just a matter of when. When discussing possibilities about who to work with, they were the first to come to mind. Knowing they were more than capable to execute a perfect visual to accompany the feeling of the song, we briefly discussed ideas and feelings within the track and gave them a lot of creative freedom over a concept of their own. What came to be is a VHS drenched hyper nostalgic ode to friendship and love that really speaks for itself in its own right.

E&D: It’s been five years since your debut album If Only. How have you grown as a band since then?

Jordon: The band has always been in a state of constant change. For a while I was operating as a solo project with other live musicians after the release of If Only and began cataloguing ideas for this new record. Before the writing process of In The Interim began, Sophie Day and Cobia Goddard had joined the fold after we bonded during a tour with their old band. Their contributions to this new album were essential in No Sun achieving the sound I was after. Now days the project is split between Salt Lake City and Chicago with our drummer Jake Morse and I.

E&D: You released a cover of ‘Nazi Punks Fuck Off’ by the Dead Kennedys a few years ago. How was that received and why did you decide to bring that out?

Jordon: It was originally for an anti-Trump / anti-fascist compilation that never saw the light of day, so we decided to release it as a stand alone single and donated the funds to the ACLU. Growing up in hardcore and punk music, I knew I eventually wanted to try to cover a song from that world through No Sun’s lense. We’ve played it live a few times but it was mostly just for fun to say we did it. We had a lot of fun turning such a high energy song into a sludgy doomgaze track.

E&D: What songs would you love No Sun to cover in the future?

Jordon: There’s a few I have in mind that will potentially happen when the time feels right but for now we’ll be focusing on new material.

E&D: How did the band start in the first place?

Jordon: I moved from my small town in southern Utah to Salt Lake City, away from my bandmates of a previous project and had a lot of time on my hands to find new ways to be creative. I was drumming for that band at the time so guitar felt like a fun way to explore new territory. I ended up recording a bunch of demos and recruited a few friends to play in the band at the time. It definitely has evolved into a completely different sound from where it began but to me the evolution has made sense.

E&D: No Sun obviously have a big shoegaze influence in your music, was it the loud/quiet dynamic that you love incorporating into your music?

Jordon: I think it was more so the juxtaposition of noise and more ethereal moments combined into one sound that inspired me. I love feedback and abrasiveness in music, and feeling the energy behind the recordings. I think that initially was what drew me into shoegaze.

E&D: What are your favourite shoegaze albums of all time?

Jordon: MBV’s self-titled is definitely one of my all time favorites. All the classics that defined the genre are really high up there for me as well. Swervedriver’s Raise and Mezcal Head are some of my favorite alternative records of all time. Bowery Electric’s Beat is also an essential to me. Also definitely not shoegaze, but a lot of the Cocteau Twins records that predated shoegaze have had a massive impact on me. I’d say they’re probably my favorite band.

E&D: What are the bands live plans once the album is released?

Jordon: We’re laying low for 2022 with our sights on returning to live music next year.

E&D: What No Sun live gigs stand out in your mind as particularly memorable?

Jordon: We’ve had the privilege of playing some really incredible shows over the years, but some of the shows that really stand out to me were when we had the opportunity to play with The Telescopes and LSD and The Search For God at the Echo in LA. We also got to play Planning For Burial’s Below The House record release show at Saint Vitus in Brooklyn a few years before the pandemic. To play a sold out show in Brooklyn for our first time in New York was truly insane and it was extremely kind of Thom to have us open that show. Also playing in SLC with True Widow was a major highlight for me because they’re one of my favorite bands.

E&D: How is the alternative music scene in Salt Lake City like at the moment and what bands are impressing you at the moment?

Jordon: The alternative scene out here is at an all time high in my opinion. SLC is a little understated in that way. We aren’t a major stop on tours and sometimes get passed over but we have lots of really talented bands out here. Idi Et Amin is not only my favorite local band but also one of the best shoegaze bands going right now. Aside from them, Choir Boy and Sculpture Club are both great despite no longer technically being local to SLC. Body Of Leaves, Mercy Seat, and Worlds Worst are some other bands I’m really excited about right now too. On the heavier side of things, Rile, Narc, and Cult Leader all have my heart.

E&D: What have been some of your proudest moments in your time with No Sun so far?

Jordon: Other than the shows I mentioned, being able to play Canada was a really amazing opportunity. I remember we drove to Montreal on our first US tour and all of us just thinking “holy shit. We’re in a different country because of music. What?!?”. Working with Zac and Church Road Records on this new record was a huge milestone too.