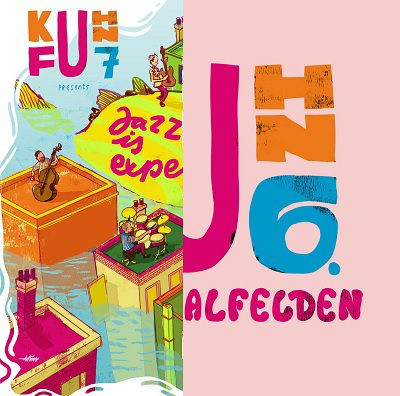 Jazz is Expensive / Live at Saalfelden by KUHN FU

For 10 years, KUHN FU have been challenging listeners by bringing their own form of jazz by mixing in dadaism, prog, punk, and the RIO movement rolled into one. Whether you get it or you don’t, you have to appreciate the danger that awaits you when you put one of their albums on. Because it becomes a dangerous roller-coaster ride that is intense, eruptive, humouristic, and kicking you in the massive gut.

This double release; Jazz is Expensive and Live in Saalfelden, showcases the band with the right amount of ammunition they’ve brought to raise a huge amount of hell in their own form of the cabaret motif. The first set is their own take of a new version of the Brothers Grimm story, The Fisherman and his Wife.

And the second half of the album is their performance captured on ORF / Radio Ö1 at Saalfelden in Austria for the International Jazz Festival in Saalfelden on August 20th, 2021. Listening to this double album, it puts you in the front seat, watching the sextet blaze through a hot production level of this volcanic explosion, waiting to happen. For Christian Kühn, he knows exactly how he wants to get the audience and it listeners, the moment that they’ll never forget.

On ‘NO1’, you get a sense of a dangerous tightrope with unexpected climaxes, not knowing when the rope will be cut or not. Between Dikeman, Taubenfeld, and Delius, they add enough rope for the dancer to make it across the walkway. And it becomes a blistering attack the moment Kühn comes kicking in with some sticks of dynamite that have just exploded out of the blue with the wah-wah monster attacking its prey.

‘Fisherman’ sees the wind section creating these fart noises which are wacky as Kühn sets sail in this bossa-nova groove to view the hot Brazilian sun and go out fishing for Salmon while ‘IIIsebill Blues’ lays down the tank-like slowed down groove for a twelve-bar blues section with some nods to the Crimson-like territories and Dave Edmunds’ ‘I Hear You Knocking’.

Quite an odd approach for KUHN FU to tackle those ideas into one by taking their own version of the blues, but it works like a charm! But once you get to the punk-like tempo of ‘Dmitri’ at the festival, you can tell audiences needed that sense of composure.

‘Harry Sanchez’ is a spectacular take that knocks the studio version on the Kuhnspiracy debut, out of the ball park. You can hear Hadow working on these calming motifs on his kit to give the wind section a chance to come bring the cobras out of the wicker basket, and what can we expect when they start terrorising the neighbourhood as ‘Timpe Te Shuffle’ goes into a reggae-like version between The Cardiacs and Max Webster’s ‘Toronto Tontos’.

Kühn’s midsection throughout his guitar, becomes a nod to the Raymond Scott composition, ‘Powerhouse’ which has become a cartoon staple for the Clampbett-era from Bugs Bunny and The Ren & Stimpy Show. You can just vision the shorts between Falling Hare and Mad Dog Hoek, using the tenth track as an alternate score for what is happening inside the cartoons from their own respectable way.

Next, they do the oom-pah with a twisted approach of the ska meeting a ‘60s garage rocking fanfare ending for the horns to bid farewell on ‘Servus Servus Schuhplattler’ and bringing out I believe the Mellotron in this tidal waving climax to go in a frenzy on ‘The End’ and bringing the Mystic Knights of the Oingo Boingo for the ‘Slacker’s Fanfare’ to send the roller-coaster ride to an end.

Sly, wacky, enormous, and fierce-like powers, KUHN FU does it again! Yes it’ll take a while to get into, but you have to understand how long it took to get the recognition they deserve. Say what you want about them, but this double album is a dish well-served with a shit load of hot spices that’ll make you want more and more to see what you’ve missed!