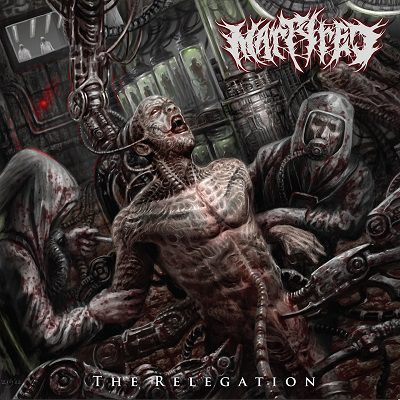 The Relegation by Martyred

Whenever I would hear something, coming straight from the heart of Austin, and yes we have to make it weird no matter what. Whether it’s Witchcryer, Golden Dawn Arkestra, Emily Wolfe, Proud Peasant, or the Aaron Clift Experiment, I know that their music is calling for me. But something has landed upon my lap with a brutal sound that’ll make my head bang, 24/7. That band is death metal’s own Martyred.

Launched in 2003 by founding guitarist Mike DeBord, who would later take a long hiatus in 2010 after releasing their 2007 EP debut Exemplifying Their Defeat and reforming five years ago, Martyred are like an earthquake waiting to happen at the right place, at the right time.

Their first full-length album, The Relegation, is the real deal. This is a balls to the wall, snarling-like bomb explosion that’ll whoop your ass so hard, you wouldn’t sleep for the rest of the month. Now we ain’t talkin’ about that shitty cover band Steel Panther, believe me we ain’t talkin’ about them (hell to the no!), I’m talking about pure, bold, angry, intense, and bloodthirsty death metal motherfuckers!

While I’m not the biggest death metal fan, Martyred took me on a vast scale with their music that needs to be played at maximum volume. It is pulsating and terrifying at the same time. Kreig Perry, Jason Frankhouser, Rene Martinez, and Stephen Fernandez, give Mike all of the ammunition they need to raise hell.

Because Martyred aren’t just a band, they’re a band of brothers working together to stand up and fight. There are elements between Slayer, Mayhem, and Mastodon rolled into one as Krieg’s grovelling vocals and ticking time clocks from Martinez, lights the fuse to let the explosion go off at any second.

The power of the doubling riffs and roaring textures that DeBord and Frankhouser would do on ‘Toxic Transmissions’, ‘Sadist Globe’, ‘Inquitous Transformation’, and ‘Divine Pestilence’, will make you think of the ‘80s thrash metal scene in the Bay Area, followed by the first wave of Sweden’s death metal genre, taking influences of grindcore, d-beat, and hardcore punk sounds that’ll make you shit your pants like crazy!

But here, with The Relegation, it is the perfect artillery for Martyred, the proper recognition they deserve. Not just in the Metal scene, but giving the lone star state, a real massive jolt of electricity.