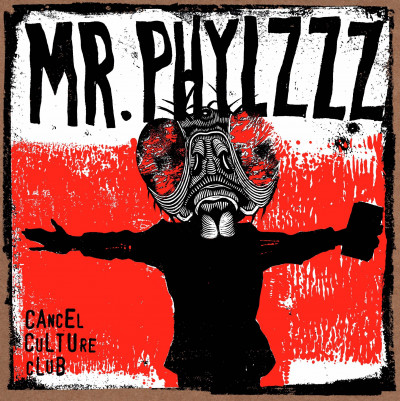 Do you really want to hurt me? Well, do ya punk? Do you want a sweaty, garage noise, rock ‘n’ roll fit or do you want the tiresome everyday? What is up with these bastards? Looking directly at them raises too many questions. It’s not just the untrustworthy moustache. Are they taking the piss? Is Cancel Culture Club a playful gag or a greasy flag? What about that name? Mr Phylzzz is pronounced Mister Flies with drawn out buzzing sibilance on the last letters. I have checked and double checked and the spelling always has the y and l flipped. So it’s actually Mister Filzzz. Dumb or deliberately annoying? That’s the dilemma. Mr Phylzzz is an insect headed mutant clown and while he looks weird he keeps all the balls in the air like the consummate showman he is, step right up…

Coming out from behind the curtains to intro/opener ‘Mr Phylzzz Cancel Culture Club!’ a diseased and collapsing rewrite of Sgt. Pepper’s Lonely Hearts Club Band, there’s all your jovial cynicism and noise rock anti-seriousness in a sour chewy nugget. The last track is called ‘I Took A Selfie At The Protest So Now I’m A Good Person’ which is a mouthful so full it’s hard to breathe. A scabrous blast of riffs and in the red screaming they mash The Star Spangled Banner and The Lord’s Prayer together in its opening seconds, split the track in two with witty use of a cheerful old time cinema concession ad then end on a cassette ejecting. If you wanna taste the magic you got to close your eyes and make a wish, kid.

Amphetamine Reptile should need little introduction, a powerhouse noise rock institution in the 80’s and 90’s it burned out, took a break and since returning in lower key style has mostly put out reissues and Melvins records. Haze doesn’t feel the need to release new bands all that much these days, so it’s a mark of approval that he’s bothered and Mr Phylzzz are kind of a core AmRep type deal. Loose, obnoxious, garage rock with an infectious rhythmic swing. Witness the supreme dumb riff of ‘In Memory Of A Houseplant’ and try and deny its head-banging momentum. The full stamp of parental approval lands on single ‘Mr Entertainer’ with guest spots from King Buzzo, Kevin Rutmanis (Cows, Melvins) and Haze XXL himself although, y’know, I’m pretty sure they’d have been fine on their own.

While there’s an atmosphere of barely controlled noise about the record there is nothing sloppy or unfinished. The song arrangements are razored down, swerving the temptation to stick (or leave) extra minutes of noise everywhere. Sharp edits in writing and recording keep the album zipping along at a sleek 25 minutes. For all their rough ‘n’ ready approach to recording it sounds pretty huge a lot of the time, check the monster ‘Jesus With A Shaved Head’. The quick pitch for this is that they sound like the mid point between Melvins and The White Stripes. Buzz Stripes, if you will. It’s certainly a whole lot more fun than Jack White’s recent blue plastic hair rock. Not that it’s derivative, what nostalgia there is, is secondary to Mr Phylzzz own twisted insect imaginings.