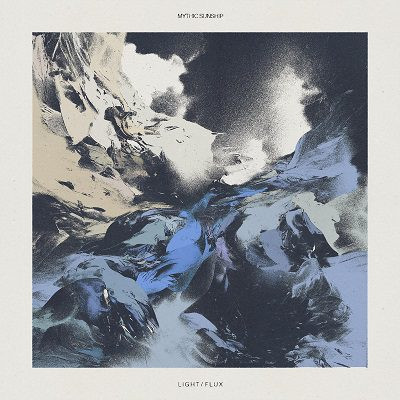 The Sahara desert, just brought in a giant sandstorm coming all the way from Denmark. With hypnotic sounds, cosmic atmospheres, and a mixture of psychedelic jazz thrown into the telescopic view, Mythic Sunship comes across the landscape.

With five albums in the can, Mythic Sunship have taken listeners to bridge those massive formulas of heavy riffs, experimentations, and tuning in to see what the future will be in the years to come. Their sixth studio release and their second from the Tee Pee Records label, Light / Flux is a melodic and harmonious exploration.

The quintet walks through those heavy sandstorms with six tracks that’ll keep them on foot. The 10-minute track ‘Decomposition’, sees the band going into this eerie ghost town with reverbing guitar sounds, followed by a ghostly sax, bringing to mind a doomy version of Camel, combining with Manuel Göttsching, handling the production levels between Roxy Music’s ‘The Bogus Man’ and Manfred Mann Chapter Three’s ‘Travelling Lady’.

The opener ‘Aurora’, is a crossover between Pink Floyd’s Dark Side of the Moon-era and ZZ Top’s opening riff to ‘I Thank You’ from their 1979 release, Degüello. With a swirling bluesy and soulful introduction, they fill up studio time to bring guidance and float upwards to the skies.

Indian tribes come flowing through the picking bases for the Sunship to set up camp. Tense-like atmospheres in the battlefield, they embark the fight across the red-like ‘Blood Moon,’ to the band’s answer to Hawkwind, The Velvet Underground, and krautrock heroes Faust on ‘Equinox’.

When you hear the revving engines on ‘Tempest’, you think of the Beastie Boys distorted rap-rocker ‘Sabotage’, but the band makes the track a life of its own. They fire up the ship with a wildly free-jazz improvisation, inspired by Magma’s 1970 sole self-titled release.

But the sonic blast of the guitars, make the jump to light-speed to head back home to Earth with a sombering end for the ‘First Frost’ to appear in the middle of a heavy snowstorm that awaits them. Mythic Sunship’s compositions are an otherworldly expedition.

It may take a while to get into their music, but the balance of experimental, psychedelia sounds, and crazy sax work, it shows how much proof on what a wild ride it must have been.