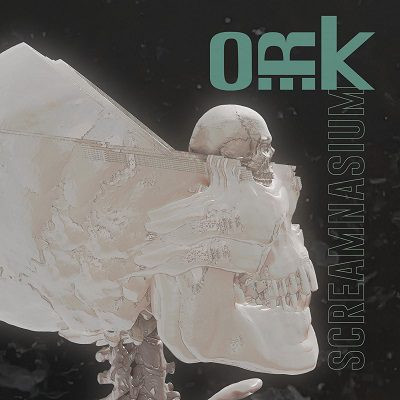 Something has lurked behind closed doors as Kscope makes the sounds more extemporary. It’s always an opened approach to bring more crafted ideas, and yet, the most razor-sharp releases with a minefield, waiting to explode for O.R.k by coming back with a counterstroke.

Their follow-up to 2019’s Ramagehead entitled Screamnasium, is as fearless, gutty, lenitive, and tremendous releases they’ve unleashed this year. They proved themselves that they can come back with something stronger and more in your face attitudes by unleashing more intense arrangements that is evidential on their fourth studio album.

‘Consequence’ which features Lef duetting with Grammy award nominated singer Elisa Toffoi, performing under the mononym Elisa, brings a hypnotic effect to the song. When she pours her heart out, you feel not only Lef’s pain, but Elisa walking through this eerie deserted utopia that’s in ruins.

Quite a stand-out track that O.R.k gives Elisa all of the capability to climb towards our solar system while Lef tells her to keep going and reach towards the milky way. ‘I Feel Wrong’ delivers a sliding effect from Pipitone while Edwin and Mastelotto trade boxing punches between each other in the place of action.

The rhythm section lends Lef more zeal to let all of his anger come out in the ascending climax while  the opener ‘As I Leave’ goes for the pain and heavier structures the pandemic brought through each other. Mastelotto becomes this ticking time bomb, waiting to erupt at any second for the chorus to come in with Carmelo’s strength-widen attack.

Then, the keyboards go into this frenzy-like screech while ‘Hope for the Ordinary’ transforms into an extreme yet time-changing workout. Lef’s spoken Italian dialog, ab-exercise drilling from Pat, and weightlifting beauty done by Pipitone, it opens up the doors into this ominous loony bin. Combining Devo’s synths from the New Traditionalists and Oh No! It’s Devo-era, The Cult, and Chris Cornell-like approaches for the ‘Deadly Bite’ to happen.

Jo Quail’s cello closes the album with ‘Someone Waits.’ She gives O.R.k a provocative crossing on her preparations to come home in a large fiery competition. The quartet have done it again with Screamnasium.

And with an incredible artwork done by Tool’s Adam Jones and Marvel/DC Comics illustrator Denis Rodier, it adds a sense of a disturbing nightmare that’s unfolded right in front of our very eyes. And the fear itself, is only just the beginning.