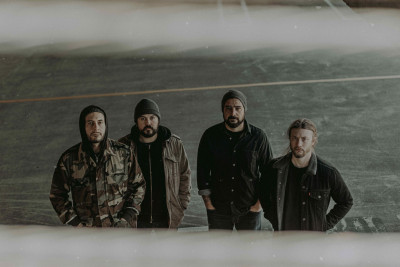 Even though touring is even harder now in terms of finances and logistics, we’d been waiting so long for this that we jumped in head first.

Irist have just released the Gloria EP and it sees the Atlanta metal band expanding on their debut album Order Of The Mind with explosive results. With Irist in the middle of a European tour with Elder and Pallbearer, which hits the UK imminently, Gavin Brown caught up with guitarist Pablo Davila to hear how the tour is going, the release of Gloria, bringing out their own beer and how the band upcoming new album is shaping up.

E&D: You have just released your new EP Gloria. What has the feedback been for the EP been so far?

Pablo: So far we’ve gotten great live feedback on this tour, and the reviews from various publications seemed to have mostly been quite positive.

E&D: Can you tell us about the songs on Gloria and what influenced this new music?

Pablo: The songs were written almost immediately after completing the recordings for our debut record Order Of The Mind. I’m really not sure what influenced them at this point, because they were written almost 3 years ago. I will say that I was pretty set on incorporating electronic/synthetic elements into these particular songs. They personally remind me a lot of what was going on during the pandemic, because we were actively working on them during that time.

E&D: You’ve brought out a stunning visual for the EP track ‘Surging Ablaze’. Can you tell us about that and the song itself?

Pablo: The visualiser was done by 12 Inch Media. We gave them a handful of ideas for what we were going for, and they did a great job of putting that together for us. ‘Surging Ablaze’ is essentially about relief after enduring a tumultuous period.

E&D: Is Gloria a good indication of where the music of Irist will be going in the future?

Pablo: I’m not sure to be honest. We’re stylistically all over the map when it comes to the existing demos. I think that by the end of this year we’ll have a better idea of what our next album will be shaping up to be. Part of our writing process is giving demos the time they need to marinate, so that it’s easier for us to tell if they’re worth keeping.

E&D: Your debut album Order Of The Mind came out a couple of years ago. What is the status of a full length follow up to it?

Pablo: It’s definitely close to getting there in terms of sheer material. We just need to put more thought into the overall sound and message of the next record, before we really commit to anything.

E&D: How has the album been received so far?

Pablo: Keeping in mind that we didn’t get to tour it due to the pandemic, I’d say that it was pretty well received. It’s been over 2 years since the release date and we’ve written and put out an EP since then. Hopefully as we continue to put out more music people will go back and discover Order Of The Mind.

E&D: You’re currently out on tour in Europe with Pallbearer and Elder. How is the tour going and what have been some of the highlights so far?

Pablo: It’s been going great. We currently have about 10 dates left. Playing Amplifest in Porto and Desertfest in Antwerp were both pretty special for us. We met some great people and the shows themselves were pretty electric.

E&D: Were you looking forward to hitting the road on the tour even more as you couldn’t tour for Order Of The Mind because of the pandemic?

Pablo: Absolutely. Even though touring is even harder now in terms of finances and logistics, we’d been waiting so long for this that we jumped in head first.

E&D: Were you big fans of both Pallbearer and Elder before this tour?

Pablo: For sure. We’ve seen both bands as fans back home, so touring with them is a real honour. There are great people in both camps.

E&D: You are playing at the Damnation Festival as well very soon, opening up the stage headlined by Godflesh and Converge. You must be excited about that one?

Pablo: This one will definitely be a huge highlight for me. I’m a massive fan of both bands and they’re each playing what are arguably their best albums. Dream come true.

E&D: Who else are you looking forward to checking out at the festival?

Pablo: Aside from Godflesh and Converge, I’m particularly excited about seeing Full of Hell and Pig Destroyer. I know that our vocalist, Rodrigo, is really stoked for My Dying Bride.

E&D: Have you been playing a lot of new material on this run?

Pablo: Not so much, because we haven’t gotten the chance to play the stuff from Order Of The Mind until this tour, so fans are hearing those songs live for the first time too. We threw in a couple of songs from the new EP but that’s about it.

E&D: What are your touring plans after and going into the new year?

Pablo: We’ll cross that bridge when we get to it. It took quite a bit of work on our end to make the current tour a reality, so we’re just focusing on enjoying it without thinking too far ahead. There will for sure be new music next year, which means that a tour will be tied in, but no timeline for anything as of yet.

E&D: What are your tour essentials, things you can’t live without on the road?

Pablo: We’re pretty easy in that regard. The only thing I’d say we all require is coffee in the morning, so that we don’t rip each other’s eyes out.

E&D: What have been some of the best live shows that Irist have played so far?

Pablo: The two that I mentioned before (Antwerp and Porto) were both great. We also had a really good show in Leipzig at UT Connewitz, which is easily the most beautiful venue we’ve ever played. We hope to get back to all three cities in the near future.

E&D: What are you currently listening to and enjoying on your stereo?

Pablo: We’re listening to the band Netherlands at this very moment as we drive through the Swedish countryside.

E&D: Irist brought out a rye IPA with Little Cottage Brewery for the release of Gloria. Can you tell us about it and your recent EP release party?

Pablo: We decided to do a collaboration with our very good friends at Little Cottage Brewery in Atlanta, Georgia. Somewhere along the way we thought it would be cool to serve the beer at the two EP release shows, and we all somehow managed to make it happen. The shows went really well and it felt like an actual family reunion. Lots of Atlanta and Athens homies for both dates.

E&D: What beers do you enjoy most and what are your favourite bars?

Pablo: I live in Texas now and don’t really drink that much beer these days. Modelo and Live Oak Pilz are a couple of go-to’s for me when I’m in a beer mood. As far as the other guys, they’d probably say Modelo and Tropicalia (Creature Comforts). My favourite bars in Austin, where I live, are Kinda Tropical and Yellow Jacket. In Atlanta the other dudes go to Flat Iron pretty regularly.

E&D: Have you been enjoying the European pubs and bars on this tour?

Pablo: For sure! Really looking forward to playing Ghent because we have lots of good friends there and Belgian beer is out of this world.

E&D: If you could see another band bringing out their own beer, who would you like it to be?

Pablo: At this point it seems like so many bands have released beers that I’d probably be way more excited about a hot sauce release.

E&D: What are your musical roots and how do they influence what you do with Irist?

Pablo: My earliest influences are rooted in Latin American folklore and indigenous music mixed with classic rock and prog, thanks to my dad. In the early 90’s I was super into grunge and punk, and later on dove into heavier stuff. I honestly have no idea how they influence what I do in this band. Writing is a pretty thoughtless and primitive-feeling process for me. I do think that I have the tendency to first think rhythmically, which is possibly due to all of the Latin music I grew up with, but who knows. As long as our music can cut into an emotion I’m happy.

E&D: Who are your all time favourite bands and artists from Atlanta and Georgia?

Pablo: There are so many for all of us collectively. A few of them off the top of my head include: Cinemechanica, Manray, Kylesa, Baroness, Mastodon, Whores, Lazer/Wulf, Vincas, Maserati, Powder Room, Motherfucker, The Coathangers, Black Lips, and R.E.M.

E&D: How has Atlanta influenced you as a musician and the music you make?

Pablo: That’s hard for me to answer at this point because I haven’t lived in Atlanta for a couple of years. I’ve never really been sure about the exact role that our hometown has played on our music. During my time in Atlanta, I went to a lot of shows that were pretty inspiring and would inevitably lead me to writing more music for this band. There was definitely some weird energy exchange thing going on that’s impossible for me to really understand.

Pablo: They change all the time. I’m a pretty unsettled person so I tend not to linger on anything, and that includes music/musical influences. Nowadays I’ve really been enjoying the more industrial, noisy, sombre, and repetitive sides of music. Killing Joke has moved back into the forefront. I’m also really loving what Oranssi Pazuzu has been doing. Lately I’ve been on a Chat Pile, Unwound, and Zola Jesus kick. Street Sects, Deafkids, and Health are all doing great work too. I recently discovered a band that really caught my attention called TAGABOW.

E&D: What have been some of the highlights of your time with Irist so far?

Pablo: This is a tough one. The single highlight has been having had the opportunity to share some of the best years of my life with my best friends. Everything from shows to travels to getting signed, to going through difficult life stuff. It all feels like a single experience and I’m infinitely grateful for it.

Irist’s new EP Gloria is out now and are touring the UK with Pallbearer and Elder next week.