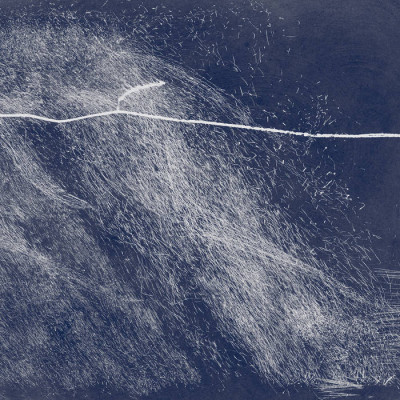 The Softened Shore by Peter Knight

When you mention composers/trumpet players beyond Miles Davis and Don Cherry who have truly bent the rules beyond, jazz, rock or modern classical music, probably the first two names that would come to mind would be those of Jon Hassell and Nils Petter Molvaer.

Some though might have in the back of their minds the name of Australian composer and trumpeter Peter Knight, and a number of them would probably be unfamiliar with his name or his work.

The reason for both might be that The Softened Shore, Knight’s latest release is his first solo outing in over a decade. In the meantime, Knight, who is the director of the Australia Art Orchestra, was devoted to other extensive improvisational and band projects.

So the music on The Softened Shore, dedicated to the memory of Knight’s late friend Ania Walwitz, might come both as a surprise and a revelation.

Simply, with the music on this album, Knight confirms his place as one of the more current top trumpet innovators. This is not only due to his incredibly sophisticated tones on the said instrument but also due to his compositional and arranging concepts applied here.

Knight, who has mostly recorded the music by himself (trumpet, voice, synthesisers, laptop electronics, Revox B77 reel-to-reel) uses the help of Fia Fiell – synthesiser ( on Eunoia) and Jacques Emery – bass (on the title track) to come up with a set of intricate musical pieces that combine, ambient drone, jazz and modern classical music into pieces that cross the lines between mourning and melancholy wit an almost enchanting effect.