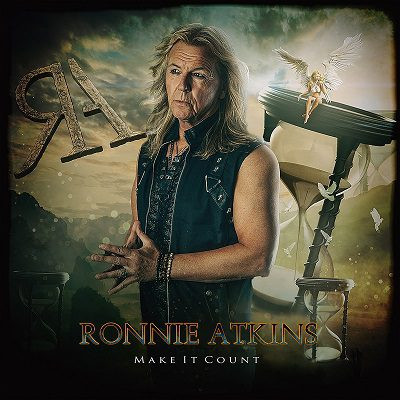 Make It Count by Ronnie Atkins

Ronnie Atkins has been carrying the flag of metal so proudly, he refuses to back down without a fight. Co-founder of Danish’s own Pretty Maids in 1981 with guitarist Ken Hammer, the band released sixteen studio albums, four live albums, and for EP’s. He has released first solo debut album last year entitled One Shot on the Frontiers label. Now in 2022, he’s back with a vengeance on his latest follow-up, Make It Count.

The themes on Atkins’ new album has an autobiographical structure. It details his struggle with his battle with Lung Cancer three years ago. He had almost 33 radiation and four chemotherapies during the fall and was cancer free. But then a year later in October, the cancer came back.

For Ronnie, while it must have been a big blow for the big “C” to return, he’s proven himself that he has more clarity and becoming older and wiser to keep making music until it is time to call it a day. Make It Count has an emotional boundary that he’s brought to the table, with a positive message. Even though life is very short, you have those precious moments you have right now and touch base with your old friends you haven’t talked to for a long, long time.

And for Chris Laney who not only produced the album playing both keyboards and guitars, lends Ronnie a helping hand to bring his album to life. ‘Grace’ channels Tears for Fears’ ‘Everybody Wants to Rule The World’ as Oliver Hartmann brings out the massive solo kit, followed by Morten’s keyboard sections detailing a clearance by removing those dark, grey clouds whilst seeing a small glimpse of the sun.

The intense battle on ‘Blood Cries Out’ speaks epic-symphonic-thrash metal at its finest. He combines the two genres into a delicious healthy smoothie, before going into a dooming-electronic spaghetti western as the clock starts ticking rapidly for the powder keg to explode at any second.

Ronnie’s no fool, he knows his roots very well and gets down to the nitty-gritty to make sure he’s got it right. ‘I’ve Hurt Myself (By Hurting You)’ is a sun-rising introduction to fall in love with their loved one again. It’s a reconciliation like no other. You get a sense that after you had that big massive fight you have last night, you realise that you might cross the line with them.

But then the fighting comes back with some action as we look into the future on ‘The Tracks We Leave Behind.’ When I was listening to Ronnie’s vocals, he resembles the singing voice of Cam Clarke (the original voice of Leonardo from the 1987 series of Teenage Mutant Ninja Turtles).

He sound like Clarke when Ronnie sings, however, once he hits those high notes, you almost couldn’t let the album go. Because it’s so powerful. It’s like listening to Harry Nilsson’s music all over again.

‘Rising Tide’ returns to the ticking time bomb as Allan lays down those heavier attack throughout his drum kit setting up all of the crazy Black Friday riots every holiday season that customers go bat-shit crazy over the items they really want. At times, it channels the sounds of City Boy’s ‘The Day The Earth Caught Fire’ before Berg unleashes all of that energy like a snarling blood-thirsty beast, ready to eat a shit load of human flesh, and go on a cannibalistic feast like no other!

The confronted argument comes to a head as two person-play sung through on ‘Remain to Remind Me’. Vikström’s backing vocals has turned her character into the troubled wife and Ronnie as the stubborn husband, not knowing how much they try to fix the relationship, it goes through the same mud, again and again. But once Berg comes in, he gives them a chance to calm each other down and go through their separate walks to cool off.

The closing title-track is a sad farewell. Once you know that the pearly gates are about to be opened, it is time to go. Ronnie gives listeners all of the push in the final song with a Ray Charles-like vibe, and letting the mourners know, don’t feel sad, but celebrate the legacy with a gospel-like edge to fill up those churches with a Halls & Oates texture.

Make It Count gives us the perfect handshake on Ronnie’s mission. It is a job well done release from the Frontiers label. And he has succeeded to let the music do the talking and letting us know how much he’s accomplished his assignment. And it’s a crown-like jewel, waiting to be revealed.