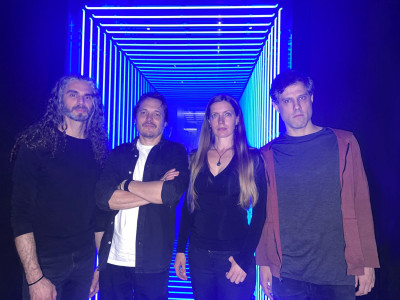 There are a lot of differences between the two albums, and I see that as a positive sign of growth and evolution.

With their latest album Vonals, New York’s Titan to Tachyons combine jazz, metal, avant-garde and improvisational pieces among others to create a sweeping and vibrant instrumental listening experience. Gavin Brown caught up with guitarist Sally Gates to hear all about Vonals and its creation, the band’s new lineup and their blending of many different influences to create the music of Titan to Tachyons.

E&D: Your new album Vonals has just been released. What has the feedback on the album been like so far?

Sally: It’s been largely positive so far. It’s early days, but we’ve had some insightful reviews come through from people that really get it. We’ve played the new tunes live a few times and it’s been great to experience the crowd’s reaction and feedback.

E&D: How does it feel to have the album out and was creating and recording the album a smooth process?

Sally: It’s a great feeling to finally have it out after working on it almost daily over the last year or so. It was a condensed process, where I set myself on a schedule to finish a song every two months. One advantage to the pandemic times was that all of us were more free to collaborate, and we were able to work together as a band to develop and refine the pieces more intensively. Recording with Colin Marston is always a smooth process. His studio has a great atmosphere, and things are fairly relaxed. He’s worked with all of us many times, and knows what we want as a band. Tracking the pieces flowed really well, we knocked out the tunes in the first two days, then spent another two overdubbing, editing, and really diving into the solos.

E&D: How much of the album was made up of or started by improvised pieces?

Sally: ‘Close the Valve & Wait’ was entirely improvised in the studio, starting with the idea of these slapped harmonic textures, that we jokingly called the ASMR section. All of the pieces contain improvisational elements, and generally anything I write comes from improvising first, then developing it with the band. When playing live, improvising or having abstract sections that are directed keeps things lively and engaged; everyone is present and communicating with each other, and it’s always different each time.

E&D: Did you feel any pressure in following up your debut album Cactides?

Sally: Definitely, but as this was pressure I was putting on myself, I largely tried to ignore it and write whatever I felt I had to express. There are a lot of differences between the two albums, and I see that as a positive sign of growth and evolution. The circumstances under which each album was written were quite different; Cactides formed over the course of four years, and was written during time spent in New Zealand, Miami, and NY. Vonals was written over about 18 months during pandemic times, and came out of my journey moving to NYC, absorbing the music scene here through playing and improvising with many different musicians.

E&D: How is the new lineup working out for the band and what does new bassist Trevor Dunn bring to the sound of the album?

Sally: We’re all really digging the band as a quartet. Trevor’s contributions are invaluable; he has a great era for arrangements, and basically elevates anything you throw at him. Having a third voicing allows the guitar and basses to flow and trade off between rhythmic, melodic, and soloist roles. We’re able to add an extra layer to counterpoint and polyrhythms within the material which really allowed the compositions to develop and flourish.

E&D: Trevor appeared as a guest on your first album, how did he come to join the band as a full-time member?

Sally: Zorn contacted me in June 2021 saying he loved our first collaboration together (‘Everybody’s Dead, Dave’), and suggested we present our next record as a quartet through Tzadik. This had already crossed our minds, and it was the perfect excuse to make it happen. The material I’d been writing was calling for a third string voicing, so it really came together well.

E&D: How did Titan to Tachyons start as a band in the first place?

Sally: On a trip home to New Zealand, I felt I needed a break from my guitar and started writing lyrics and general conceptual ideas. I wanted to begin something new that was entirely mine, after playing in other people’s bands most of my career. (The lyrics never got used, but they helped creatively kick-start things.) Upon returning to Miami, I took solo material that I had written and began jamming with a drummer, Davin Sosa. We recorded a demo of the first two songs, which I took with me to NYC a few months later when I moved. Soon after arriving I got booked to play a show, and enlisted Kenny Grohowski and Trevor Dunn to join me. We improvised for most of the set, but also played ‘The Starthinker is Obsolete’. I kept writing with Kenny, but unfortunately Trevor’s busy schedule meant we had to find someone else to play bass. I met Matt Hollenberg around the same time, and we’d jammed together on guitars a few times. When I told him we were looking for a bass player, he promptly volunteered to play bass VI with us. We played our first show together as the ‘Sally Gates Trio’ in February 2019, and recorded the first album a few months later.

E&D: The members of the band have served time in many bands from Imperial Triumphant and Cleric to Orbweaver, Fantomas, and John Zorn to name a few. Do you all bring elements of your rich musical past into the music of Titan To Tachyons?

Sally: For sure, your musical background and experience makes up who you are as a player, shaping your voice and ideas. It’s truly a pleasure to create music with such versatile and capable musicians. They have such a large vocabulary on their instruments that makes things feel unlimited.

E&D: Did you always want to try and push the boundaries between metal, jazz, and other influences with your music?

Sally: I think blending influences is something that happens naturally with anybody who writes music. You’re subconsciously taking an amalgamation of everything you’ve been exposed to and retelling it in your own voice. As my tastes broadened and developed, my music did too. When I was a teenager writing for my first band, I was mostly listening to extreme metal bands. I was also studying music in high school, and would get ideas from classical pieces that I would turn into metal riffs. So right from the start, I was combining elements of the different genres that I was exposed to.

E&D: Are you looking forward to hitting the stage again at the end of the month, especially now Vonals has been released?


Sally: Very much so! I’m looking forward to playing the new material for everyone, and am very grateful that we’re finally able to tour. Our first record came out in late 2020, so unfortunately we had to forgo any live dates.

E&D: Will you be playing a lot of new material at the upcoming shows?

Sally: Yes, we’ll be playing pretty much all new material as we’re going out as a quartet. We may sneak in an older tune from time to time though.

E&D: Why are Titan to Tachyons live plans for the rest of the year and heading into the new year and will you be making it across to the UK and Europe at any point?

Sally: The East Coast dates we have will be our last live appearances for this year, as shortly after I’ll be flying home to New Zealand to perform solo at the Wellington Jazz Festival and a few other dates around the country. When I return next year we’ll be booking more. I’d love to get us over to the UK & Europe soon!

E&D: Who are the biggest influences on the sound and vision of Titan to Tachyons?

Sally: I’m very visually inspired, and a lot of the material is developed more in the manner of a soundtrack; taking influence from films by Stanley Kubrick and David Lynch. Elements of Surrealism, quantum physics, and science-fiction also make up a large part of how I form ideas, textures, and arrangements. Painting the album artwork is another side of this expression, conveying the musical images.

E&D: What have been some of your favourite moments with Titan to Tachyons so far?

Sally: Recording is always a highlight, in particular creating ‘Everybody’s Dead, Dave’. I always love working in the studio, and this piece was a great experience directing the four part improv, and describing the storyline and emotions to the band. Everything just flowed and came together exactly as I imagined it. Some favourite live shows were with Car Bomb, as they’re such an amazing band, and really great guys. Both times we played together the venues were packed and had great vibes, you could just tell everyone was enjoying themselves.