(((O))) Review: The Tronosonic Experience – The Shadow Volumes I & II 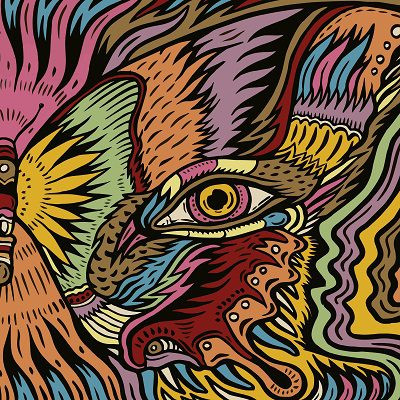 The Shadow Volumes I & II by The Tronosonic Experience

Whenever you put on an album, it stays with you, forever and ever. It almost becomes the soundtrack of your life. The same thing that goes with me. Whether it’s Genesis’ Nursery Cryme, Gentle Giant’s The Power & The Glory, Amon Duul II’s Wolf City, or The Mars Volta’s Frances The Mute, it is a part of your life. Here’s something that just completely caught me off-guard. And that band is The Tronosonic Experience.

The power of these four individuals, they’ve prepared themselves by walking into the lion’s den whenever they’re ready and armed. And it’s quite an ear-listening experience from what they’re about conquer. This was like going back and listening to my Rune Grammofon releases from Elephant9 and Krokofant albums along with RareNoise’s WorldService Project’s music, all over again when I was listening to the Tronosonic sound.

But when it came the two-part release of The Shadow (The first volume released on March 18th, and the second released that same month on the 25th), I had prepared myself to join them into the lion’s den as well. And it is an experience that is brutal, intense, and immerse. On ‘Sheik’, there’s an eruptive confrontation between Bardal and Nypan, ringed into the boxing match with Nilsen’s idea of a loose cannon technique that has a turbulent and heart-pounding attack, coming out of the blue.

And with Ottesen’s bass that goes up and down the shafts, they know right there and then, that they’re never going to get a hit single from the two-part release. I can hear elements of Omar Rodriguez-Lopez’s arrangements that were used in the 2003’s De-Loused in the Comatorium, mixed in with a cat-and-mouse chase throughout the Tom & Jerry and Clampbett-era Bugs Bunny cartoons from the 1940s that’ll perk your ears all the way up.

‘Golden Comet’ opens up with a drumroll, followed by a Fripp-like assault from the Wetton period on the Larks’ Tongues in Aspic sessions. It’s almost like a continuation of where the midsection jam had left-off between each of the band members while preparing to walk into the next room with Bardal and Ottesen, playing with each other’s improvisational turns as Nypan and Nilsen step back to give the sax and bass lines a chance to let out the anger, right in front of our very eyes.

When you hear something called ‘The Last Stand’, this is where Nypan enters some of Hendrix-like territories, he opens the door by going into this massive assault of the wah-wah pedals with unbelievable results. But he channels Grand Funk Railroad’s ‘Sin’s a Good Man’s Brother’ from the Closer to Home album by descending down the lairs that has these monumental, slicing textures Mark Farner would use to launch these snarling overtones in the opening song.

The 12-minute epic ‘The Shadow of the New Praetorian’ will make you think of those early German bands between the progressive and krautrock-era in the golden-era of the 1970s. Opening up with an eerie needle pin drop crescendo, you can tell that the band members are ready to hurtle themselves across the cosmos.

Almost like a nod to both Eloy and Nektar’s approach of the Space Rock sound, they take it a step further by having this space maddening effect of paranoia, waiting to erupt at any second. It’s the insane complex signatures that are unexpected with these odd time changes before diving into the storms of Amon Duul II’s ‘Wolf City’ with a Göttsching-like approach from the first two Ash Ra Tempel releases.

Then, just as everything starts to relax, Nypan creates these static-like effects to get his instrument back on track before landing on this deserted planet as Bardal lands the ship, to unveil a calm before the monsoon-like crescendo’s coming back into a full swing in the last two minutes of the piece. ‘Beehive’ is the Tronosonic’s answer to a psychedelic response on Thelonious Monk’s ‘Well You Needn’t’.

It’s the appreciation of the bebop jazz world taking a strange turn of events. But for Bardal, it blends perfectly well by appreciating his love of the maestro’s work with hypnotic riffs and doomy-like arrangements that ascends upwards to an eerie western for Ottesen’s bass as he takes us into an epic roadshow spaghetti western, channeling Geezer Butler’s ‘Hand of Doom’ intro-loop in ‘Chiaroscuro’.

The Shadow is The Tronosonic Experience’s sedative release from the Apollon label. There’s a sense of danger, not knowing what will happen next, and having the chance to come out with a job well done, you as a listener began to realise that the mission itself, has only just begun. And it’s going to be a challenge to see where the quartet will go next.