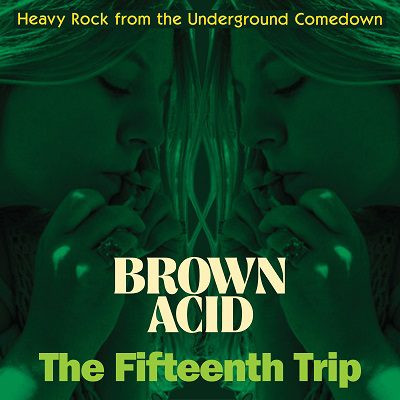 Well in about two weeks, Halloween comes crawling in for trick-or-treaters to be spooked and having enough candy in their bellies. So it’s time to go into that Brown Acid once more for the fifteenth time with more unearthed nuggets by proving listeners that these unknown bands and artists were way ahead of their time. RidingEasy has been doing this seven years now and they proved themselves that they’re not stopping to find hidden treasures from the hard, stoner, glam, and proto-punk sounds of the late ‘60s, early ‘70s.

The ten selections on this bad boy, shows how much Lance Barresi and Daniel Hall are the label’s answer to Sherlock Holmes and Dr. Watson, finding these obscure gems honoring Lenny Kaye’s groundbreaking Nuggets compilation, fifty years ago. There’s the organ driven turned blistering garage rock attitude of the Scrap Iron’s ‘Roxanne’ as it channels The Music Machine’s arrangements with swirling midsections that becomes a tidal waving effect.

White Lightning’s ‘Under The Screaming Double Eagle’ is a fuzztone punk-rock train chugging attack resembling The Count Five’s ‘Psychotic Reaction’ while The Looking Glass takes a trip down into the underground scene of the Ladbroke Grove scene in the psychedelic period with its ‘Peter Gunn’-sque riff and snarling vibrations to ‘Take The Time’ and the meditating vibes of Quintessence’s Island years on the second part of ‘Space Travelling’ from Robert Starks.

They play a mean, menacing vibe whilst having the time of their lives by getting down to business and making the sure they knocked it out of the ball park with some hay-wiring improvisations. Black Hawk’s ‘Little Suzie Looker’ has that ‘70s glam rock rough quality texture that either Suzi Quatro, Slade or Sweet could have written during their time between ‘Can the Can’, Desolation Boulevard, and the sessions for Slayed?

Just listen to it, you can tell Black Hawk are going into this glittering stomp and motorcycling rev by getting their make-up on, and channeling those two bands and Suzi’s clothing designs with an attitude. Next, we fly over to Iowa from the Rockadrome archives of Truth and Janey’s cover of The Rolling Stones’ ‘Under My Thumb’ with a Stooges-like approach.

I hate to say this, but Truth and Janey’s version of the song, is a whole lot better than the Stones’ original song. Here, they bring the fire, the attitude, and right into the territories of Frijid Pink’s sound while Strongbow’s ‘Change’ has some Deep Purple-like organ and bass approaches from the MKII-era with Ian Gillan during the time they were recording their groundbreaking classic, In Rock.

Crazy Louie’s ‘My Pants’ is a ride down the highway with pummelling beats and showing their loved one, with an Eddie Cochran approach of ‘Somethin’ Else’, that their next chapter is going to be one helluva ride as Negative Space’s ‘Forbidden Fruit’ goes into the Brum-like dooming approaches between Black Sabbath, The Move, and The Chocolate Watchband’s textures of ‘Are You Going to Be There (At the Love In)’.

So how was my trip during the next venture of the Brown Acid that I’ve been given? Well, let me just say that after going through The Fifteenth Trip, just got even better. Lance and Daniel, really take it up a notch to go for the jugular by making the volume levels maximum as hell. Yes the qualities on the recording are rough, but is it worth checking out? Oh, hell yeah.