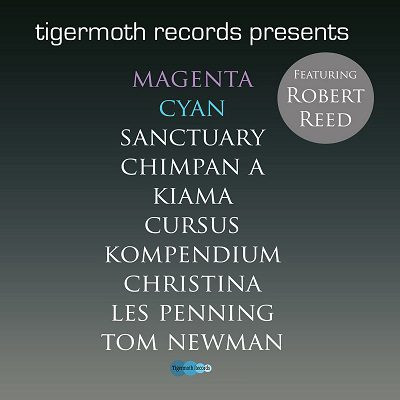 Taken its name from a track on Steve Hackett’s 1978 release of Spectral Mornings, Tigermoth Records launched ten years ago for Rob Reed’s band Magenta, but has opened up the door alongside the Welsh prog maestros from Chimpan A, Les Penning, Kiama, Mike Oldfield’s producer Tom Newman, and the all-star project Kompendium featuring, you guessed it, Hackett himself.

Featured in issue 129 of PROG Magazine, which covered the history of Rush’s Moving Pictures in honour of its 40th anniversary, Tigermoth Records has allowed Reed to go beyond the different landscapes of the prog genre with incredible uplifting momentum that’ll make you spread your wings and fly. And on these enduring highlights, Reed pulls back the curtain to reveal the magnetic links that are on the label.

The guitar driven turned alternative rock voyages of Magenta’s ‘Demons’ from the Home album still holds up for Booth to give all of her might and fly across the cities between London and the Big Apple, knowing that her character has to make a decision from the two locations that she would call home. Tom Newman returns to the forest and meets the small furry creatures and greets Brian Froud-like characters from Faerie Symphony II with the ‘Dance of the Stems’ while Reed channels Anthony Phillips’ 1984 on the ‘Man of Feathers’ who reveals to us, the dark side of the 30th century. And what we have to watch out for when it comes.

The ambient turned trip-hop jazzy smoky dance from Chimpan A, takes you into the heart of Paris, France in the late ‘50s, early ‘60s by writing ‘Sam’s Song’ before Booth returns once more as she fights back tears from her solo debut channeling Peter Gabriel’s sole self-titled 1977 Car album in the styles of ‘Slowburn’ to head towards ‘The Light’.

Tubular World returns to the first part of Oldfield’s breakout on the excerpts from Tubular Bells playing ‘A Minor Tune’ in a mournful aftermath as Kiama lays down some heavier bluesy attacks of a strained relationship for the man’s ‘Cold Black Heart’. It has a clock-ticking verse and erupting chorus in the midsection, knowing the relationship is coming to an end.

And you can imagine that all hell has broken loose as the bomb starts to explode. But just as the confrontation gets heated in to a maximum, Kompendium sets sail into the unknown with nods to Pink Floyd’s Wish You Were Here-era on the ‘Mercy of the Sea’, and writing a Celtic love letter to ‘Lilly’.

Angharad Brinn’s ghost-like vocals bring a sense of spirit and loss to a loved one who had been in the aftermath for many, many years. When you hear Brinn’s vocal lines in the song, you can feel the goosebumps behind you. She reminds me a bit of Mariana Semkina from iamthemorning as she writes the final letters in the composition to say farewell to her loved one before the angels take her up to the pearly gates.

The second part of The Ringmaster brings a mournful cry to the gods with a monk-like choir and heavenly guitar improvisations on the second part of ‘The Hat’. Reed sets up the walk towards the Oldfield Mountains with Newman leading the way from bass marches, unexpected dance to the mandolin deaths, and classical walk into the waters with twists and turns.

While I have a bit of a soft spot for Tigermoth Records, PROG Magazine’s digital sampler has always peaked my interest on what to look out for. Some I’m familiar with, some that may have perked my ears up a bit. For Robert Reed, he’s come a long way by proving himself that he’s more than just a member of both Cyan and Magenta. And who knows what the label will have in store in the years to come throughout the roaring ‘20s.