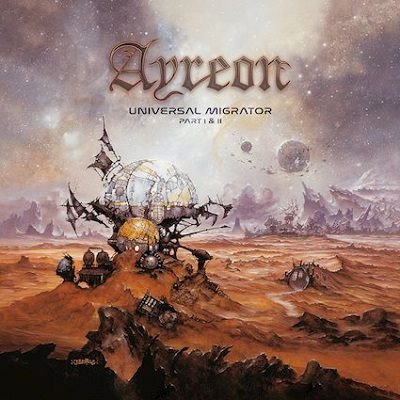 In the summer of 2000 Arjen Anthony Lucassen released his fourth and fifth studio release under the Ayreon project; The Dream Sequencer and Flight of the Migrator simultaneously on June 20th. Originally released on the Transmission label and re-released as 2-CD set on the InsideOut Music label in 2004, both of the two albums sold very well and were positively reviewed. The first act has these prog-like gems. And the second act, goes in for these massive kills with heavier approaches.

Whenever you put on an Ayreon album, you have this vision of a movie inside your head that Arjen has unleashed. It’s his own version of a 2-D animated sci-fi metallic opera brought to life and delivering the goods to give the Disney franchise, a real, massive kick in the family jewels. Now in the year of our lord 2022, the Universal Migrator has been reborn again in time for a remixed and remastered edition.

What Arjen wanted to do with the remixed version of the doubled albums was to re-visit the dream machine once more by digging out the old tapes. There were 70 tapes of 40 minutes each of the songs he recorded. It turned out when it first came out originally, he wasn’t too happy with the way it was done as he felt it was a bit flat.

And it was a massive amounts of work for him to go back and remixed the classic. It’s almost as if you haven’t wore your old shoes for a long, long time, or an old friend you haven’t seen as well. While Universal Migrator never got the recognition due to being in between Into the Electric Castle and The Human Equation, it is time to give the remixed edition the proper handshake it deserves by rising from the stratosphere.

The eerie ‘2084’ takes us right in the middle of a warzone that’s going on. You can feel the synths rumbling earth’s crust, Lucassen’s dooming post-apocalyptic guitar lines, followed by Clive Nolan’s keyboard work, and Lana’s crying to the gods in the middle of a blood-red sun, bringing to mind unsung krautrock maestros Agitation Free’s ‘Haunted Island’ from their 1973 second album simply titled, 2nd.

‘The Shooting Company of Captain Frans B. Cocq’, I know it sounds like something Traffic could have used instead of Shoot Out at the Fantasy Factory, but it does have a Hawkwind-sque approach. The uplifting improvisations, Beatle-sque lyrics from Tuesday Child’s Mouse, soaring Leslie-like pianos with sliding guitar improve, and Mellotron-like funeral arrangements.

The drumming on here sounds a whole lot better and right in center than the original version. And what Arjen has done is to bring all of the instruments to life on this track, paying nod to both Lenny Kravitz’s ‘Believe’ and the Live at Pompeii-era from Pink Floyd at the final section of the song while Russell and Damian bring out the big guns to go in this massive cannon blast a-la with blistering riffs for the ‘Dawn of a Million Souls’ with a symphonic attack, followed by this Uriah Heep approach of heavy organs soaring through the sky.

But once Bruce Dickinson comes to the forefront by taking listeners ‘Into The Black Hole’, that’s where everything changes. Not only is it a standout 10-minute epic that is raw, energetic, and dark, Arjen gives Bruce a chance to reveal his darker side by diving into Peter Hammill’s territories. And boy, the arrangements on the remix is right in your face.

It proves that he’s more than just a front man with Iron Maiden, but giving Arjen the approach of a job well done of what evil is lurking behind the invisible place across our solar system. And what’s inside isn’t pretty at all. The midsection has a strange combination between brutal heavier riffs, synthesisers going bat-shit crazy in the styles of the Italian prog-rock scene in the ‘70s from Banco, P.F.M., and unsung non-Italian maestros, Triumvirat and Gentle Giant.

When Stratovarius’ Timo Kotipelto comes charging in to make the jump to light speed by getting ‘Out of the White Hole’, Arjen and Warby lend Timo a hand to reach towards home before going into this fanfare midsection as if they’re honouring Queen’s ‘March of the Black Queen’ medley from Queen II. There’s a moment of relief where they visit the various planets to remember when they grow old and tell their children of what they saw.

Not to mention the orchestral turned folkier approach for Krezip’s Jacqueline Govaert singing styles of the late, great Judy Dyble (Fairport Convention, Giles, Giles & Fripp) to reveal her love of the genre, and medieval times where everything was quiet, good, and calm throughout the ‘Temple of the Cat’ while Johan Edlund and Floor Jansen share a darker detailing both the loss of innocence, rough childhoods, and the dangers of war on ‘My House on Mars’.

Complexity, dark, sinister, ominous, surreal, and Twilight Zone-sque atmospheres, the remix of Universal Migrator brings it all home. Yes it may take a while to get into. But once you get into the story, it’ll take you into those parallel universes where you never seen them before in the castles of Ayreon. And it’s an adventure worth taking.