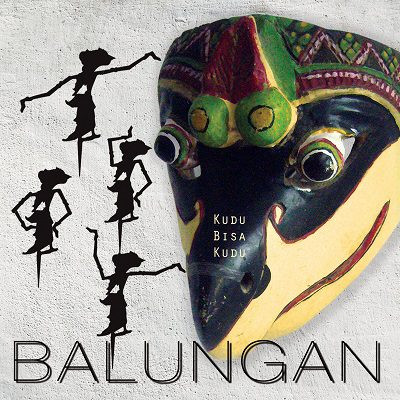 While MoonJune Records spanned across the globe from Germany, Italy, France, and Indonesia brought the music from Tohpati, simakDialog, Andre Dinuth, Dewa Budjana, and Dwiki Dharmawan, it’s time for the Cuneiform label to travel across the Emerald of the Emperor. And that is the 13-piece ensemble named Balungan.

The translation of the term is “skeleton” in Javanese, and it is the basic form of gamelan music, made up of percussive instruments. It is one of the most common forms of the instrument, which are the metallophones, played by mallets, and hand-played drums called the kendhang / Kendang, by registering the beat.

This recording took place on May 23, 2017 at the performing arts center in Cavaillon, France where the Scène Nationale de Cavaillon took place. It showcases the band featuring founder and drummer Guigou Chenevier of the Rock In Opposition group, Etron Fou Leloublan.

For Balungan, they aren’t just an ensemble with musicians playing gamelan, the performance that is featured on Kudu Bisa Kudu, they’ve written compositions with intense arrangements that have a dynamic and in-your-face approach that Chenevier and his fellow French musicians were in the ride of a lifetime, they’ll never forget.

It becomes this dangerous tightrope in the last section of the composition with its culminating segment, by going into this chaotic frenzy while ‘Meet’ features some spaced out, doomy sliding atmospheres that represents early Floyd and Sabbath’s ‘FX’ from the Vol. 4 album, with rain dropping effects.

Both ‘Nikiniku’ and ‘KethéK Saranggon’, sees Balungan taking these intensive work-out exercises by creating a call-and-response texture in the beat poetic-like movement of the songs. The guitars and gamelan’s share a constant respect towards each other by reaching upwards to the top of the volcano.

‘XGY14’ sounds like a sci-fi film from the new wave of cinema in the Czech Republic in the 1960s with music by Luboš Fišer. There’s a sense of no one coming to help you, the sounds of pin dropping momentum, the brutal imagery, and a clock-ticking finale form of escaping to the emergency pods.

But it’s the 11-minute piece ‘Beteng’ where everything comes together as the bandmates deliver a message to the gods. This is where you have the forms of the Tuvan throat singing known as khoomei, honouring the Lateralus-era from Tool with Terje Rypdal handling the production levels, and middle-eastern vocalisations setting a course to Mount Semeru.

Listening to Kuda Bisa Kudu, took me a while to get into. It does bring back memories when I first heard Captain Beefheart’s 1969 magnum opus, Trout Mask Replica 17 years ago. When I first heard it, I was like “What is this crap?” But then the second time I listened to Beefheart’s album, I fell in love with it. Because it shows how Don and the Magic Band were breaking the rules.

And that’s the same thing with Balungan’s Kuda Bisa Kudu. It is a challenging release. Whether you get it or you don’t you have to appreciate what the ensemble were doing on that Tuesday Night, and to close out a quote from the comedy classic Stripes by John Winger, That’s the Fact Jack!