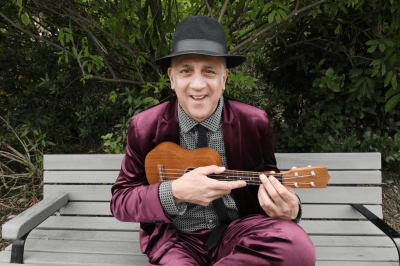 I’ve been stabbed, assaulted, fellated and ignored onstage for decades now. This band doesn’t dwell in the past, we’re taking over right now!

Blag Dahlia has been raising hell, causing chaos and not giving a fuck since he emerged with The Dwarves in the mid 1980s and isn’t stopping any time soon. Under his new alias, Blag Dahlia has just unleashed his latest solo album Introducing Ralph Champagne and it sees the punk rock hero adopting this new persona to being out a collection of easy listening, retro Americana and outlaw country songs with brilliant results. Gavin Brown had a no holds barred chat with Blag to find out all about Ralph Champagne, his new book, The Dwarves and all manner of raising sheer hell throughout his career!

E&D: You have just released your solo record Introducing Ralph Champagne. How has the album been received so far?

Blag: There have been riots in the streets! Everyone wants this record, in fact several Ralph Champagne fans were stampeded to death in a record store near Kankakee, Illinois trying to buy it, and in Des Moines, it’s pure pandemonium!

E&D: How did the Ralph Champagne persona come about in the first place?

Blag: I stole the name from Josh Freese, celebrity drummer and poodle enthusiast, who played on the record. I thought it might be fun to create a ‘lounge lothario’ type guy who does catchy songs with great players and hip producers. In the Dwarves it’s more like screaming the word fuck a lot and destroying venues.

E&D: How was the experience of recording as someone else and did it make it easier to do than under Blag Dahlia?

Blag: Technically, this is a Blag Dahlia record, entitled Introducing Ralph Champagne, but yes, when I inhabit a different character I can take on a different voice and inject a layer of subtlety that often eludes the Dwarves.

E&D: How was the experience of doing the video for ‘Lolita Goodbye’ with Eliza Winn and Iz/Fuzz?

Blag: I had such a great time doing that video! Eliza and Iz and really everybody involved were all so good, and the final product was hilarious. It also got me kicked off AirBnB, but hey, that’s rock n roll for you…

E&D: Have you always been a fan of country and easy listening music?

Blag: I’m a very omnivorous music fan, I love country, jazz, blues, novelty, musicals, dance music, all kinds of stuff because of the Dwarves approach to things that wasn’t always clear, but if you really listen you find elements of everything in our kind of punk rock. Now with this record, those elements are out in front, the punk is more of an attitude and not a sound on the Ralph Champagne record.

E&D: Will you be doing live dates as Ralph Champagne?

Blag: I really hope so. It’s tough because I sometimes do acoustic shows with this material, but it really needs a full band to execute this record live. I’m hoping we can get that together and make it happen at some point.

E&D: Would you consider doing another album under one of your other aliases like Earl Lee Grace, Blag The Ripper or Julius Seizure and even a joint album with Ralph Champagne?

Blag: Sure, all the aliases are fun! But I think Ralph Champagne is kind of a synthesis of the country of Earl Lee and the lounge pop of Candy Now, but the production on here is so cool it just kind of stands on its own. I should do a musical and try to bring them all together!

E&D: Who has your favourite ever musical alias?

E&D: You’ve also got a new book coming out called Highland Falls. Can you tell us about that?

E&D: Are there plans for new Dwarves music any time soon?

Blag: Fuck yeah! We have an entire double album worth of music all ready to mix. Every genre represented, and just about every dwarf ever on there. The last punk band returns to show the feeble how it’s done…AGAIN!

E&D: What have been some of the most memorable Dwarves live shows of all time?

Blag: I’ve been stabbed, assaulted, fellated and ignored onstage for decades now. This band doesn’t dwell in the past, we’re taking over right now!

E&D: What have been some of the funnest and most debauched times with the Dwarves that stick out in your memory?

E&D: Will you be producing more bands in the future and what have been some of the highlights of your producing over the years?

Blag: No! Every time I have guests in the studio to work on a record of mine we have a great time and it turns out great. No matter who it is, we laugh, enjoy ourselves, no problem. When I do someone else’s record…

E&D: With the solo record, book, Dwarves and everything else, how do you find time to fit everything in?

Blag: I owe it all to clean living and 12 hours a day of meditation.

E&D: Do you think that you’ve made a lot of enemies along the way, especially in the music industry and does that make you laugh?

Blag: Everything makes me laugh. I’d rather have friends than make enemies, but making enemies is so much easier.

E&D: What else makes you laugh the most?

E&D: How do you feel about cancel culture today?

Blag: Welcome to my world, I’ve been getting canceled since the 1980’s! At least there’s a few assholes who blackballed me that aren’t riding so high anymore. It’s not so fun when it happens to you, is it?

E&D: Do you think that any music still has the ability to be shocking in 2022?

E&D: Do you still feel like the James Brown of punk rock?

Blag: Indeed, except I can’t dance, I’m still alive and I can handle my PCP!

E&D: Who would be the Blag Dahlia of soul?

Blag: Rick James, bitch! Now check out that Introducing Ralph Champagne record and that Highland Falls book before I do all your coke and fuck your grandma!