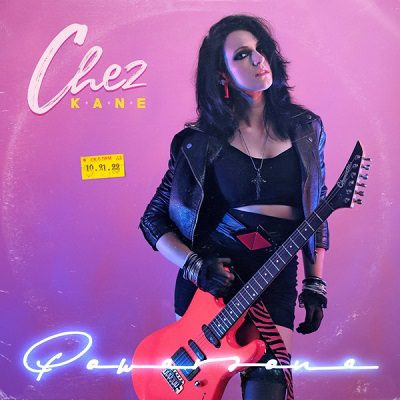 Quite a breath of fresh air coming from the UK who has talent, power, energy, and taking the melodic rock scene with a giant battering ram, preparing to knock the door down by welcoming the one and only, Chez Kane. She was picked by Crazy Lixx front man Danny Rexon, who worked with Chez on her 2020 sole self-titled debut during the lockdown. And now, she’s come back for seconds with her latest release, Powerzone.

Released on the Frontiers label, Kane keeps the spirit of the female hard rockers from the 1980s by tipping her hat to the legends, and holding the torch to never let the legends die. And with Rexon returning to the production levels once more, she’s not backing down without a fight.

The music video for ‘(The Things We Do) When We’re Young In Love’, takes you back to the Arcade’s in the shopping malls to clear your head and get the tokens used up by playing Donkey Kong, Pac-Man, or Q*bert, nonstop. But it also has the times of being young, rebellious, and being free from all of the tricky situations from your parents.

Not to mention a crossover between Journey and Roger Hodgson’s Frontiers and In the Eye of the Storm. ‘Rock You Up’ is Chez’s appreciation to Def Leppard’s Joe Elliot as she spreads her wings to fly across the Thames. Rexon’s instrumentation, brings a sense of hope and attitude, channeling the late Steve Clark and Phil Collen’s sessions from the Hysteria album.

The title-track sees our hero shifting gears as she goes into combat. Kane adds a twist of lemon by walking towards the territories of the NWOBHM movement while adding her own taste of the power ballad done right with beautiful piano arrangements for the next generation to speak towards the ‘Children of Tomorrow Gone’.

When you hear Chez pouring her heart and soul throughout these tracks, you can tell that not only she’s a fighter, but a boxer. She can defend herself and won’t take shit from anybody. And if you try to mess with her, she’ll kick your family jewels so hard, you’ll be shitting your pants 24/7, and crying home to mommy.

Molloy’s speeding section on his saxophone on ‘Love Gone Wild’, has some motorcycling riffs as he and Kane take a cruise along the Chihuahuan Desert by going in a blaze of glory between The Beatles ‘Day Tripper’ and Pat Benatar’s ‘Heartbreaker’, rolled into one. Next, Chez puts on her glam make-up, honouring Jem and the Holograms on ‘I’m Ready (For Your Love)’.

She channels not only Bonnie Tyler, but the Zeppelin-like attacks that go into overdrive before reaching the Holy Grail across the city by turning into an epic-like success story on the ‘Nationwide’ circuit. Powerzone is Chez’s moment to shine. And it is a blooming flower, ready to be unfolded, and revealing its true power.