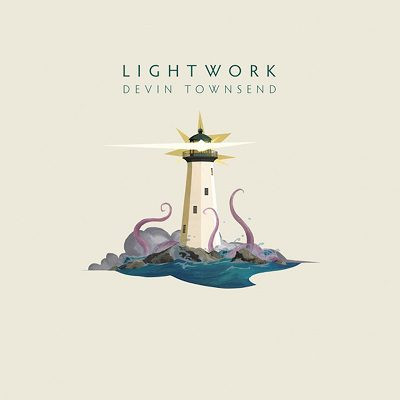 What is going on here? Is it operatic? Is it a tragic story? What is Devin Townsend doing behind closed doors? Those are probably going to be the big questions that’ll be asked in the years to come. While I’m not the biggest fan of Devy’s work, I have to appreciate the challenges he will accept by walking towards a massive volcano without falling into the orange, circling lava.

His latest release on the InsideOut label entitled Lightwork, is an amazing release. There are moments on this album where jumps from one ship to another. Whether it’s death metal, symphonic metal, experimental romances, alternative rock, or adding that fuel-driven punch of post-rock, Devy goes for the jugular.

And to be allowed to have Steve Vai, Anneke van Giersbergen, Morgan Ågren, Mike Keneally, Ché Aimee Dorval, Jonas Hellborg, and Darby Todd on here, not only they had previously worked with him before, both onstage and on albums they appeared on, they’re like a band of brothers, lending Devin a helping hand by bringing his creation to life. Lightwork is a coming home release that gives Devy, that big giant push of the bolder as it reaches the mountain top.

‘Heavy Burden’ is a twisted composition. A crossover between a militant march, and a joyful celebration inside a toy factory. You can hear combinations between Tori Amos, serving jasmine tea to Radiohead during the time they were recording their magnum opus, Hail to the Thief. You can just imagine the Robin Williams character, Leslie Zevo, leading the charge to make his Toys come to life before Christmas.

‘Heartbreaker’ has a revved-up engine that is brought to life. You can imagine Devy driving his motorcycle to unexpected lullabies that have turned into nightmarish results with conquering universes while ‘Call of the Void’ takes us back by going up into the attic, and dusting off your old scrapbook to remember those innocent times you had as a rebellious teen.

Not only Devy is making his guitar sound like a crunchy helicopter, but he tips his hat to Mark Hollis’ songwriting on Talk Talk’s The Colour of Spring. He looks at the beautiful landscape that is calling for him while the Sophisti-pop approach of ‘Vacation,’ takes us into the territories of Roxy Music’s eighth and final studio album, Avalon.

This is Devy writing his own style of the song, ‘More Than This’. He would lead listeners into the heartwarming beaches of South Padre Island, the French Polynesia, Maitra, and into the heart of Puerto Rico. The closing 10-minute epic ‘Children of God,’ brings out the gospel choir into a techno twist for Sunday Morning services.

You have the sunlight clearing out the bad weather, people getting out of their houses from the lockdown, and looking at the clear blue sky with militant themes, orchestral mounts, ambient reprises, and the call of the sea crashing into shore. And for Townsend, he returns back to the lighthouse, and goes into a nice, long sleep that he needs.

Lightwork is a complicated release for 2022. Yes it’s going to be a dividing line in the sand, but here, in the now, it’s a striking assembly that’ll make you believe in what Devin will do next.