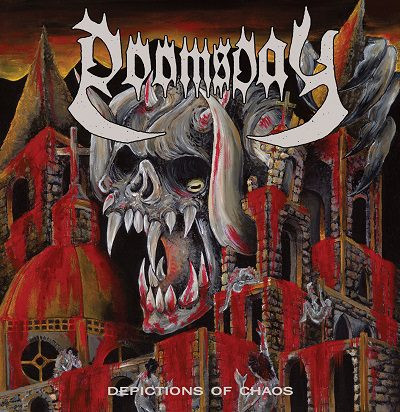 Depictions of Chaos by Doomsday

“Hand forced to dispense the end / Orders of ruined amends / Longed for something ideal /Warfare becoming too real!” Now that is a lyric. This is how you get down to business by bringing enough cartridges and raise hell. For Oakland’s own answer to the death and thrash metal scene, Doomsday are lighting the fumes.

When I say light the fumes, I mean Doomsday are really lighting those fumes like a pack of wolverines who are high on angel dust! This is metal at its best! Like a cross between VOIVOD, Metallica’s Kill ‘Em All-era, Sabbath, and Venom serving hot spicy beers to the Cowboys From Hell period of Pantera, those guys can play down, hard, and dirty.

Depictions of Chaos is all-spread panic, mixed in with a full-out bloody massacre with snarling overtones, and chainsaw guitar-like leads. And if you’re thinking they’re going to slip a sloppy ballad on you, guess what, you’re barking up the wrong tree motherfucker!

The moment the opening title-track begins, you feel a sense of insanity, isolation, and clock-ticking burst of explosions, waiting to happen. It follows the fast-paced riffs, cannonball-like effects on the drums, and preparing themselves to use one of those medieval torture weapons, and shove a red-hot poker up the asses of both Kanye West and The 1975’s Matty Healy like there’s no tomorrow!

But we’re just getting started. Between ‘Attaining Heaven by Force’, ‘Agony Blossoms Fear’, and ‘Mask of Sanity’, they play so hard, they use an iron fist to lay down the rules very strictly. And if you break one of their rules, they will go, in the words of Ving Rhames’ character Marsellus Wallace in Quentin Tarantino’s 1994 classic Pulp Fiction, “I’ma get medieval on yo’ ass!”

Head banging guitar-like structures, and gory-like sceneries from George Romero’s 1978 classic Dawn of the Dead, there’s a shit load of action to howl at the moon! Doomsday are a band to be on the look-out for. They are a true hands-down Metallic force that we badly need.

And once that volcano hits, you need to play this EP really fucking loud!