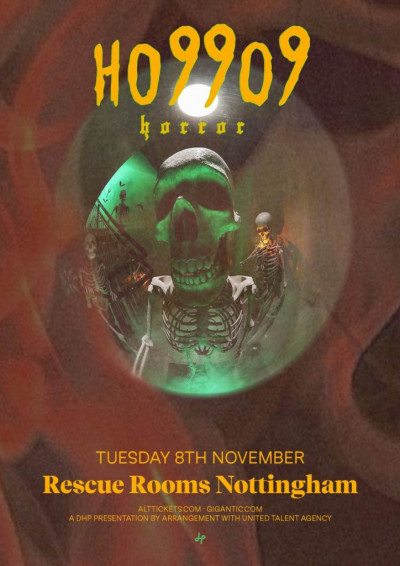 With their phenomenal latest album SKIN, Ho99o9 continue to prove that they are one of the most exciting, vibrant and forward-thinking bands out there at the moment, so the chance to see them tear it up in a live setting was a tantalising prospect. Having both the reputation of an immense live show and the songs on the albums to back it up meant that a trip to Nottingham to see them was a no-brainier.

To start the evening’s entertainment off, Graphic Nature emerge under a cloud of darkness and the ominous sound-bite that declares “What you are about to witness are scenes of a Graphic Nature” with a metal/dubstep/drum & bass hybrid to ignite proceedings. Hardcore breakdowns are the order of the night too as Graphic Nature throw down big slamming grooves to get the energy levels up. Blasting out material from their upcoming (at the time of the show), latest release Killing Floor like the furious ‘White Noise’, Graphic Nature build up momentum and get better and more fervent as they go on, blasting out their noise-laden tracks as if there lives depend on it, and by the end of of their set, they had made more than a few new converts within the audience and left to a pleasing applause.

With the audience suitably warmed up, Frank Sinatra’s ‘My Way’ blasts through the PA and Eaddy, theOGM, and drummer Billy Rymer explode into ‘Dope Dealerz’ and proceed to blow the roof off the Rescue Rooms with a fearsome display of their power. This display continues for the entire duration of their set as the energy levels just get higher and higher and proves how intense Ho99o9 are when they’re onstage.

‘Leader Of Pain’ carries on this blistering opening, and as a Sham 69 ‘If The Kids Are United’ intro segues into the banging techno/industrial assault of ‘BATTERY NOT INCLUDED’ from the years stellar SKIN album, all hells breaks loose on the dancefloor. The material from the new album comes in thick and fast with ‘THE WORLD, THE FLESH, THE DEVIL, PROTECT MY BITCH PT 2’, ‘SKINHEAD’ and ‘SLO BREAD’ all being delivered with intensity and it has to be said that the material from SKIN plays out perfectly live with Eaddy and theOGM upping the energy levels over the pounding and electrifying industrialised hip-hop beats, and in a live setting they hit even harder.

A cover of ‘March Of The Pigs’ by Nine Inch Nails gets the crowd going berserk as Ho99o9 hype up the chaos down below, which continues through the tracks ‘Hate Crime’ and ‘Mega City Nine’ before they mellow things out with an interlude of ‘Gypsy Woman’ by Crystal Waters that sees theOGM in a trancelike state as he grooves along to the music before ‘Sub Zero’ and ‘Bite My Face’ ignite the pit again.

The whole affair is infectious and the highlights keep on coming, including a wall of death with Eaddy declaring “This is where we make love, let’s fuck!”, and an appearance from Eaddy performing in the middle of the dancefloor as theOGM tears up the crowd from atop the stage – the vibe in the air is nothing short of intense, and it is that intensity that makes Ho99o9 truly special.

An impassioned speech that salutes the audience and his Ho99o9 brothers from Eaddy draws the gig to a close with big applause, but not before the group let the audience lose themselves a few more times dropping tracks like ‘Knuckle Up’ and ‘FireFly Family’ until the gig comes to an end with a rousing ‘Bone Collector’ and everyone in attendance marvels at the powerful show they have just experienced.

Tonight, Ho99o9 have more than lived up to their reputation as a ferocious live act with a completely devastating performance. Eaddy and theOGM, alongside Billy Rymer (who put in a powerhouse display on drums all night long) displayed style, rawness and an inspiring energy to show how formidable Ho99o9 are.

Listening to their albums, it is evident how powerful their music is, but live it gets taken to the next level; and they definitely proved how next-level it is in Nottingham tonight. 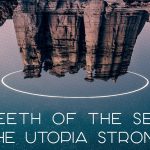