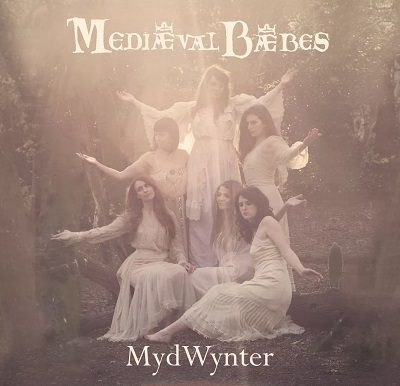 ‘Twas the night before Christmas, when all through the house not a creature was stirring, not even a mouse. Well, almost. It’s that time of year throughout November as families are getting ready to put up Christmas decorations and preparing to write their wish list for St. Nicholas. However, we need a yuletide cheer. For Mediæval Bæbes, they’ve unleashed their 11th, and loose sequel to 2013’s Of Kings and Angels, MydWynter.

The themes on their latest release have a darker atmosphere of the pre-Christian origins of winter that’s approaching. The album title is based on Ari Aster’ 2019 pagan horror classic, Midsummar. With this album, not every Christmas is full of joy and happiness, but it adds a lot of evil lurking across the North Pole.

Whatever is going inside Santa’s house, you might want to take a deep, deep look behind closed doors. ‘Noël Nouvelet’ adds a mysterious walk across the hidden passageway that sets course into the unknown of Magma’s parallel universe during the Köhntarkösz years.

It adds a sing-along texture, hurdy gurdy vibes, and meditated arrangements by bringing a sense of peace in the valley while the Baebes put up the Christmas tree with a lullaby, turned operatic vibe to ‘Deck the Halls’, and a mournful, farewell to their loved ones on the ‘Carol of the Bells’ with Consort sounds of London that is set in the mid-to-late ‘60s.

Then, they head into an extended location with droning landscapes as the ensemble starts to bring in presents, food, shelter, and wine in ‘O Little Town of Bethlehem’ and going into this mid-exercise routine as Katharine Blake gives instructions to her fellow comrades by walking on this dangerous tightrope, as they tip their hat once more to Vander’s Kobaïan language on the chanting, ‘Ríu Ríu Chíu’.

Kavus’ acoustic guitar brings a sunlifting texture of the acid folk sounds of Vashti Bunyan, Mellow Candle, and Trees while Rebecca Austen-Brown, Jennifer Bliss Bennett, and Charlie Cawood, come front and centre in this cold, wintery effect for a celebration on ‘Wexford Carol’ as ‘Personent Hodie’ sees the ensemble trading in their angelic clothes, and going for a Celtic ‘70s glam rock stomp.

It’s a big twist for Mediæval Bæbes to do. However, it is a way for the ladies to branch out and put on their make-up, honouring the styles of Marc Bolan & T. Rex’s The Slider and David Bowie’s Aladdin Sane period. MydWynter is a perfect Christmas release for 2022. It is a planned holiday season that they’ve released by going towards a rumination of Zen.

And we badly need that sense of relief to give listeners, a beautiful MydWynter to happen during the holiday season.