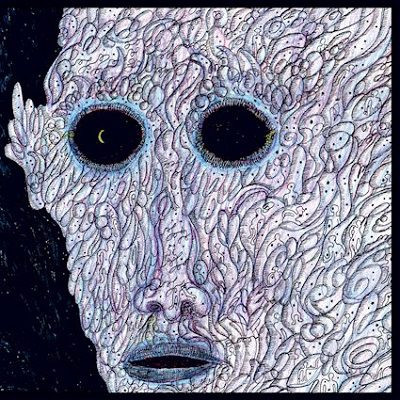 As we come to the end of Thanksgiving with our bellies filled with turkey, mashed potatoes, Boston crème pie, asparagus, and corn on the cob whilst preparing to write our wish lists of what we want for Christmas from St. Nicholas at the North Pole, something has lurked around the corner from Svart Records. A band that takes a massive approach between post-punk, doom, and avant-garde metal by bursting through those big, heavy doors with a hardcore punch.

That band is Sweden’s own Shaam Larein. Formed in 2018, they released their debut album Sculpture two years ago to underground acclaim. And they were booked to the Roskilde Festival in Denmark, sharing the same bill with singer-songwriter Chelsea Wolfe.

Now signed to the Svart label, Shaam Larein are sticking to their guns as they open the flood gates with their latest follow-up Sticka En Kniv I V​ä​rlden (Stick a Knife into the World). So the question you may ask “Who is Shaam Larein?” Well, the band is named after their distinctive-like singer herself, Shaam Larein.

She was brought up between the classical art world of Russia and Andrei Tarkovsky’s film work. She brings up these visualistic sceneries filled with a dark, surreal, and venomous approach on Sticka En Kniv I V​ä​rlden. And it’s one of the most intense releases that’ll hit you with a massive, giant battering ram.

Now I don’t want to give too much away, but Sticka is probably best if you play it in a darkened room with candles lit-up during the coldest part of winter. So you might want to dive into Shaam’s territory as she prepares to go in for the kill, with her snake-like and blood-thirsty shivers that’ll haunt you for the rest of eternity.

‘Flesh of Gold’ has some growling bass lines, like an earthquake rumbling at your feet with alarming riding cymbals and eruptive chords coming out of the volcano. The way it’s done and how they planned it, Shaam gives her bandmates to go in these terrifying tones that brings to mind Van der Graaf Generator’s ‘White Hammer’ from their 1970 release, The Least We Can Do is Wave to Each Other.

‘Beware the Duchess’ opens up with a tidal-waving effect paying nod to both Buffy Saint-Marie’s howling effect and Siouxsie Sioux taking in control of Joy Division’s lead vocals replacing the late, great Ian Curtis in a parallel universe, and making sure both Virgin and Stiff Records would take notice. You get a sense that the once-beloved city of Megalopolis that was once was, has now become a haunting ground for the survivors to get out.

And that becomes the hard part. The caped heroes who were once the world’s safest, have now turned into homicidal maniacs. And the album itself plays well as an alternate soundtrack to Gail Simone’s two-part story of the Leaving Megalopolis universe that hits you like a ton of bricks as your both listen and read at the same time as the images are brought to life as an animated movie on the silver screen.

The opening title-track has a brutal force of the seductive queen goddess bringing doom to this entire city as they bow before her to let her know that she’s running things now with an iron fist. I love how there’s a helicopter-like approach from the guitars that evokes Electric Wizard, Jess & The Ancient Ones, Violent Femmes, and Blood Ceremony.

But it’s ‘Massacre’ that brings everything to a standstill. The drums channel both The Doors and Black Sabbath’s alumni John Densmore and Bill Ward between ‘Break on Through (To The Other Side)’ and the melodic styles on ‘Hand of Doom’ with a massive heartbeat that goes bat-shit crazy.

Shaam and her fellow comrades make the journey home to make it in time for Christmas as they close it out for 2022 with strength, wisdom, to the point, and no bullshitting around. Shaam Larein are the ones you need to watch out for in the roaring ‘20s.