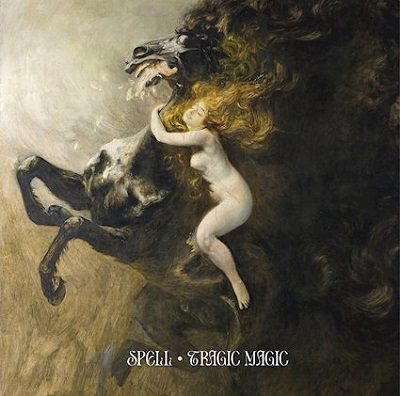 Now this completely caught me off guard. It was like something that hit me in the gut with a big, massive punch. That band is Vancouver’s own answer to the metal scene, Spell. Starting originally as Stryker, who took aspects of the ‘80s thrash scene before diving into the waters of the oracular atmospheres that was happening in splendid isolation throughout the beautiful landscapes of British Columbia.

Following their two-year period after the release of their third album Opulent Decay, Cam Mesmer and Al Lester have decided to branch out by moving away from being a three piece, into the forms of a duo on their latest album from the Bad Omen label, Tragic Magic.

Putting this album on is like watching either David Cronenberg’s 1977 unsung horror classic Rabid or the critically acclaimed Netflix animated series Castlevania. For the duo, they’ve brought in these supernatural fairy tales by bringing it to life on the big screen.

The opening track ‘Fatal Breath’ has some of these brutal attacks that they created. An ambushing tone to keep the townspeople awake, 24/7. But with a hypnotic midsection, the victims fall prey by the cannibalistic wolves that have a blood-thirsty taste of human flesh! And once those doors shut, there’s no turning back.

‘Ultraviolet’ opens with a Reeves Gabrels-sque intro continuing where David Bowie’s ‘Hallo Spaceboy’ had left off. Then, it takes several turns of the NWOBHM movement with some arpeggiated structures until the very end.

‘Sarcophagus’ itself, goes for the juggernaut. Biting into those delicious heavy riffs, and nearly returning to their home planet, the synthesisers combine the evil forces of Goblin’s score to the 1982 horror gem Tenebre, mixed in with the sessions from Blue Oyster Cult’s Fire of Unknown Origin.

And then, all of a sudden, Spell does something very extraordinary. They almost go for the power metal routine with a fanfare introduction on ‘A Ruined Garden’. Jeff Black’s piano work and Ian Chains’ epic-like aria, gives the duo a lot of free time to let Chains reveal his paragon by giving his fellow comrades, a giant pat on the back.

When I hear ‘Souls in Chains’, I think of an immense take of Justin Hayward’s ‘Forever Autumn’ throughout the diaphragm of the song before setting course for the two Lands as the god of Osiris is calling for their return while ‘Watcher of the Seas’ has a pumping ‘80s rocking anthem, followed by Rachel Layne’s soothing vocal lines, and adding more of the extension of Bowie’s return of being weird again during the Heathen-era, by singing in the styles of ‘Afraid’.

‘The Watching’ closes the album with a salute to Electric Wizard’s Black Masses. This is where they start to bring out the synthesisers one more time and play in the styles of The Legend of Zelda’s ‘Dungeon Theme’ as they close out the book of their mystic fables. And I can imagine there’s a lot more where that came from. Because there’s more stories to tell by turning the Tragic Magic fables into a trilogy in the years to come.