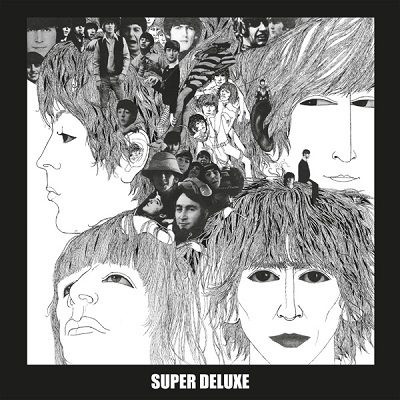 Revovler (Super Deluxe) by The Beatles

“I don’t see too much difference myself in Rubber Soul and Revolver. To me, they could both be both be like Volume 1 and Volume 2. They both were very pleasant and enjoyable records to me.” That was George Harrison in an interview from Episode 5 of The Beatles Anthology miniseries in 1995. The Beatles showed signs of growing up a little by becoming more and more productive to move forward.

They couldn’t just be those mop tops by playing the hit singles; ‘I Want To Hold Your Hand’, ‘She Loves You’, ‘From Me To You’, and ‘Love Me Do’. Nothing wrong with those songs, but it was time for a change. Taking aspects from The Byrds, experimental, Indian and classical music, the follow-up to Rubber Soul on their seventh studio release with Revolver, they were coming up with more ideas and knew it would be talked about in the years to come.

That and this incredible Super Deluxe release, sees Revolver being reborn for 2022. Originally released on the Parlophone label on August 5th, 1966 and reissued by UMC / Apple, this 5-CD set showcases the band at the peak where the psychedelic scene was starting to grow during that time frame. As I’m writing this, playing the 2019 reboot of Call of Duty: Modern Warfare on my XBOX, the music still holds up to this day.

Now I was never too crazy about the stereo mix of the album when it was issued on CD back in 1987, followed by the reissues from 2009, but it was the Mono mix that I preferred from The Beatles in Mono box set. Hearing the new stereo mixes from Giles Martin and Sam O’Kell, with help from Peter Jackson’s AI-powered audio separation technology to de-mix the album, it gives Revolver a life of its own.

At first I wasn’t quite sure when I heard the news of them using Jackson’s technology, but I didn’t want to jump to conclusions until the reissue came out. Before we delve into the box set, let’s take a look at what was happening to the fab four during that time frame.

1966 marked a turning point for them. After taking a break from their ’65 tour in the United Kingdom which would be the last time they would perform in their home country for the December shows in time for Christmas whilst promoting their sixth studio release Rubber Soul, they took three months off to refocus on their energy and health.

But they knew that Beatlemania was taking its toll. In the 2016 documentary Eight Days A Week: The Touring Years, McCartney knew that he and the other three were interested in various things. “You know, the thing is that we’re all interested in other things before the Beatles, and we really didn’t have time, but we were always looking around.”

Paul bought paintings from Paris, George had developed interest in Indian music, Ringo and John bought houses the previous year. Ringo bought one in Sunny Heights, Weybridge which was less than a mile from John’s house up in Kenwood. They were reaching adulthood and putting less in the baggage’s they were carrying.

Then in March, Bob Whittaker took these photos of the fab four dressing them up as Mad Scientists which had them covered in broken baby doll figures and pieces of meat covering them up. And this wasn’t a big deal. It would be later known as “The Butcher Cover” for Yesterday and Today during the summer of that year in June from Capitol Records.

But there was a big fuss over it and changed it for a much more proper cover instead. Between that month, July, and August, they went back on tour in Germany, Japan, and the infamous two day show at the Philippines. You could feel the tension, the atmosphere, frustration, and the nightmare was about to happen after their disastrous time from the Marcoses.

John Lennon gave an interview Maureen Cleave from the Evening Standard on March 4th where he was on vacation, then reprinted in Datebook, a teen magazine months later here in the States in a September issue (after they had finished their final tour in the US at Candlestick Park), he said the famous quote “We’re more popular than Jesus.”

The churches were starting to assembly from their congregation, less and less. The quote was really this; “Christianity will go. It will vanish and shrink. I needn’t argue about that; I’m right and I will be proved right. We’re more popular than Jesus now; I don’t know which will go first – rock ‘n’ roll or Christianity.”

It was an absolute fact in what John was saying. It didn’t reach the UK, but it did cause a huge stir in the States. A radio station in Birmingham, Alabama banned playing their music on WAQY 1220 by The Layton and Charles Show who urged people to take their Beatle material, records, etc to their 14 pickup points in the southern state and millions of them were burning them to a crisp.

You can imagine how stunned they were as it caused a huge scandal. They received death threats, and felt threatened by their lives. They knew they weren’t anti-religion, nor anti-Jesus, they had religious upbringings when they were growing up. But for John, it was up to him to put the fire out. He apologised while talking to the press in Chicago on August 11th.

As the tour plowed on in the States, they knew to give it all they got until their last stop in San Francisco on August 29th at Candlestick Park, knowing it would be the final leg and the last time they toured. They couldn’t hear themselves when they played live. But the only place they could was in the Studio at Abbey Road. And the rest as they say is history.

Now let’s delve into the Super Deluxe release of their magnum opus Revolver. As I’ve mentioned earlier, it was turning point for The Beatles where they were bringing garage rock, psychedelia, Indian, classical, and avant-rock to the core. And the new stereo mixes, are a grand slam.

This knocks out both the 1987 and 2009 remasters out of the ball park. Now there’ll be some who will prefer either those or the Mono version. And that’s understandable, but that’s for another debate.

Listening to this reissue, is like revisiting an old friend you hadn’t seen for a long, long time. The Neal Hefti-like nod to ‘Taxman’ with a response to the higher level of progressive taxes they were against from Harold Wilson, gives a life of its own as the instruments and vocals are merged into one.

I love how McCartney’s guitar solo goes for the jugular as he lets out a burst of energy throughout his instrument. It proved that he was more than just a Bass player, but lending Harrison a helping hand to lend it that optic blast through the midsection of the song.

The psychedelia beauty of Lennon’s ‘She Said She Said’ based on Peter Fonda’s comments during an L.S.D. trip, just gets even better. There was a bit of the organ parts that were buried underneath both the Mono and original Stereo mix, but comes front and centre with a carousel-like march while the hallucinated ‘Doctor Robert’ brings out the medical supplies of the different forms of drugs that you need that’ll make you calm or go crazy.

‘Yellow Submarine’. Say what you want about the song, but the highlighted sound effects which was on the Real Love EP with a marching intro from Ringo Starr, followed by the work tapes from Lennon, and gives some background on what they were doing to write the first children’s song on the album.

Most of the demos and alternate takes from discs 2 and 3, I’ve heard before from The Beatles Anthology 2 originally when it was released on March 18, 1996. But what really caught me by surprise was the actual speed of the fifth take of their single ‘Rain.’ It does have that jangly crisp on how the song would be before slowing the master tape and be used as a single.

Not to mention the extended sitar ending on take 7 with Harrison’s composition ‘Love You To’ as he keeps the raga-vibe spiritual. You can hear both his lead and high backing vocals in this take. I wished this was used in the original album both in the Stereo and Mono version where George goes into town to bring it all to a fuzz-like abrupt end.

Both the nod to The Byrds’ Roger McGuinn and David Crosby-sque guitar-like arrangements on ‘And Your Bird Can Sing’ which gave birth to the Power Pop genre, and the blaring horn sections that tips its hat to both Detroit’s Motown sound and Memphis’ Soul from Stax that inspired ‘Got To Get You Into My Life’, they continue to be in the same path to keep the spirits flowing on Revolver.

And what can you say about ‘Tomorrow Never Knows?’ There’s no simply no words to describe it. None, whatsoever. Based on Leary’s Tibetan Book the Dead, it gave birth to Industrial, dance, electronic, drone, prog, and avant-rock rolled into one. This is where they completely broke the rule book. And they pointed out that there’s something beyond of what they’ve done years before, but going in for the kill.

Now the new mixes of the singles ‘Paperback Writer’ and ‘Rain’, which appears on the fifth and final disc, they knock the mono versions out of the ball park to win the world series by bringing the set to a closing chapter, and onto the next which would be Sgt. Pepper. You can hear Paul’s bass right in front and the psychedelia trips on the B-side as the A-side, sees the band going into Garage Rock territory from the Nuggets period from Lenny Kaye’s collection.

All in all, Revolver has been reborn for the 21st century. This is the box set you’ll probably need in time between either for Hanukkah or for Christmas. So prepare yourself to delve into looking at the ceiling for a sleepy feeling with The Beatles Revolver. And ask Santa if he’s a Beatle head.