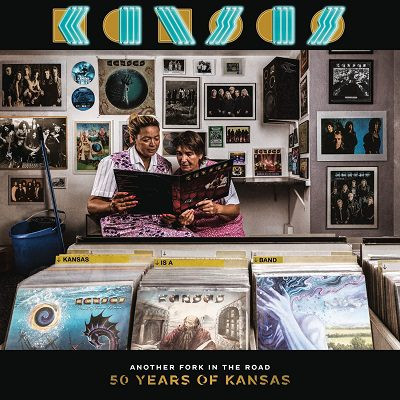 Another Fork in the Road: 50 Years of Kansas by Kansas

Finding your true self can be a long, and winding road to remember where you came from and how you started. And it’s quite an understatement from playing in bars, clubs, and making it to the big time from opening acts to auditoriums and massive stadiums whilst receiving a massive fan base.

Even though you may never please the so-called rock critics during the ‘70s, who wanted to put down both the progressive rock and heavy metal movement, you will always be the people’s band or artist. Because that’s where the fans have been with you during the present and into the future for younger generations to discover the music and see what they’re missing.

During their 50-year ride, Kansas have proven themselves that they still have that electric spark inside their veins. While they’re known for their classic rock staples such as ‘Carry On Wayward Son’, ‘Point of Know Return’, and ‘Dust in the Wind’, it’s more than just the big tracks that you hear on the radio. That and this incredible 3-CD set entitled Another Fork on the Road released from the InsideOut label which had released their two studio albums; 2016’s The Prelude Implicit and 2020’s The Absence of Presence, it goes backwards from 2020 to 1974.

Now this here is the European version of the compilation. So it’s quite a travel back in time to see how far they’ve come. Dixie Dregs and Deep Purple guitarist Steve Morse brings in the sinister overtones with a darker version of Kansas, detailing this element figure of a soothing, sexier, and fiery take of a woman who can have a card up her sleeve by turning her back on you with a metallic slither for the ‘House on Fire’.

Steve Walsh just hammers it down on his vocal arrangements by giving his organ enough fuel to light up the evening. You can feel his power, his energy, and his power coming to life by bringing this woman rising from the grave with his Ian Gillan-like approach to hit those high notes. The fast-paced approach of ‘Loner’ is a galloping acoustic adventure with blistering textures between Kerry Livgren and Rich Williams with Ehart keeping up the tempo as his pours his sweat on the drum kit.

The re-recorded version of ‘Can I Tell You’ which was made for the compilation and originally appeared on the band’s sole self-titled debut in 1974, starts things off to pull you into their universe as they revisit one of their ascending compositions to give Ragsdale a chance to go medieval on his violin while the band do a call-and-response in the midsection.

There’s a lot of energy between each of the band members as they take turns with their improvisations before reaching the mountain top as it segues into the rain-dropping sombering loss of innocence with an epic feel during the pandemic on ‘The Absence of Presence’. On ‘How My Soul Cries Out For You’ they still carry not only the metallic rush, but the nod to the Mahavishnu Orchestra’s ‘Noonward Race’ approach meeting early Moving Pictures-era, intensive drum solo from Ehart, and Boston’s Tom Scholz experimentation, they can bring the house down.

The late, great Robby Steinhardt brings a sense of a storyteller by lending Walsh a helping hand with an epic medieval texture on a coming of age structure of a world gone wrong and the journey they must embark for the ‘Miracles Out of Nowhere.’ I love how Steve and the band members including Dave Hope and Rich Williams, pay tribute to Gentle Giant’s arrangements from In a Glass House-era by showing how much they impacted their playing.

It’s quite an unexpected twist, but it works very well to add that sense of flavour in the song by reaching towards the mountains and calling for the sun to come out of the horizon with an organ rising flavour. Steinhardt takes you into the deepest part of the jungle in the hottest part of the jungle with Phil’s percussion work in the ‘Sparks of the Tempest’.

There’s the Orwellian universe, Ayn Rand atmospheres between The Fountainhead and Anthem, and brutal forces clashing from one over from the doubling guitarists to see who will rule the world with an iron fist, followed by the Hammond organ in the riff-like sequence. Then, they revved up their engines and channel the Judas Priest attack on their motorcycles, honouring the new wave of British heavy metal in the mid-‘80s, knowing that Kansas has an uphill battle to catch the criminal on the ‘Silhouettes in Disguise’.

Strong, powerful, complex, and right down the line, Kansas are still growing stronger than before. It’s more than just Another Fork in the Road. For us, we got to be a part of that journey for a long, long time on their 50-year ride that they’ve brought incredible music from the old to the new. And it’s time to go for another round to embark on the Point of Know Return, again and again.