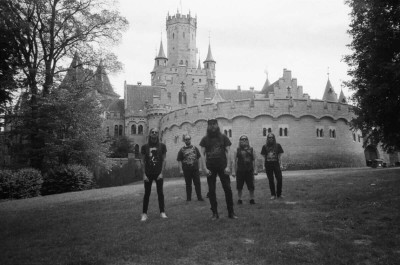 Fans of the band can expect pulverizing metal that will leave you ready to emerge victorious during any of life’s battles.

High Command have just released their new album Eclipse Of The Dual Moons and it sees the Worcester, MA thrashers crush with another album packed full of creative and completely riff filled anthems. Gavin Brown caught up with High Command vocalist Kevin Fitzgerald and he told us all about the new album, the world of Secartha, High Command’s recent tours and his music highlights of 2022.

E&D: Your new album Eclipse Of The Dual Moons is out now. How excited are you to be unleashing this new album onto the world and what can fans expect from it?

Kevin: Hell yeah we’re pumped for people to hear this shit. Fans of the band can expect pulverizing metal that will leave you ready to emerge victorious during any of life’s battles.

E&D: Does the album follow on straight after your debut album Beyond The Wall Of Desolation?

Kevin: Yeah it does, Eclipse Of The Dual Moons takes place three years after the events of Beyond The Wall Of Desolation. The sky has collapsed into madness…a new journey has begun.

E&D: The epic ‘Spires of Secartha’ finishes the album. Did you always want to have such a grand song to close the record?

Kevin: It wasn’t exactly planned that way but our guitar player Ryan has been working on that song for years. When he unveiled it to the band, it was a no-brainer that it was going to be the closer of the album. The music is grandiose, hard as nails, and it’s weaving passages lend itself perfectly for the climatic battle scene.

E&D: How much fun is it creating new scenarios for the inhabitants of the world of Secartha?

Kevin: It’s been wicked sick. To be able to get imaginative and do some world building for a heavy metal band has been fucking awesome. It’s freeing to throw my mind into the abyss and come up with some insane ideas, while having everyone else be on board with it. Writing each song is like a new chapter for the story so it’s been a lot of fun.

E&D: Have you had any thought about what is next for Secartha?

Kevin: Honestly I don’t have too many brain cells left at this point, so it takes me a while to write this stuff. Secartha is a wild place though and there’s still more realms to explore. We’re just getting started.

E&D: Would you love to do a movie or graphic novel about your music and the world you have created?

Kevin: Yes absolutely. Over the past year shortly after the record was completed, myself and two friends have been working on a comic book series entitled Secartha. This first run will be an 8 issue story arc, each issue will reflect a different song on Eclipse Of The Dual Moons. It’s going to be a much more in depth look at the mystifying landscape of the Third Realm, Secartha, and all of the lore that surrounds it.

E&D: What have been the biggest influences on the sound of Eclipse Of The Dual Moons?

E&D: Do you feel that this album perfectly merges your heavy metal, thrash, crossover, black metal and hardcore punk influences?

Kevin: I won’t say we do anything perfectly but I do like the direction that the band is heading towards. I will say I feel like we’re coming into our own more now, and we’re more comfortable weaving a sonic web merging different styles.

E&D: What albums have had the biggest effect on you as a person and as a musician?

Kevin: And Justice For All … that was my gateway into metal and the record that continues to blow my mind each time I hear it. Other ones that come to mind are Powerage by AC/DC, Exit by Tangerine Dream and Feel The Darkness by Poison Idea.

E&D: How was the experience of playing on the Season Of The Witch tour with Dead Heat and Final Gasp and what were some of the highlights?

Kevin: Yeah that tour kicked ass, it was sick to hangout with Final Gasp and Dead Heat for the week. My personal highlights were making a towering inferno of pallets with Zorn, kicking it with our friends in Enforced, and when Buckethead joined us onstage in Brooklyn.

E&D: Have you been playing a lot of material from the new album and how has that gone down?

Kevin: Yeah we’ve been playing a few new ones and they’ve gone over pretty well. People headbanging and having a good time is all that I care about. Once the record drops we’ll be playing more from the new album.

E&D: How was the experience of doing big festivals like Hellfest and Copenhell over the summer?

Kevin: Fucking unreal, that was our first time playing festivals of that caliber and we had the time of our lives. We’re honoured to have gotten the chance to play those. It was a great experience.

E&D: How did the rest of your European tour go?

Kevin: That whole tour was sick, it was our first time in Europe as a band, and personally my first time ever being there. It’s been a bucket list thing for me to go there so it was just cool to soak it all in. Saw some amazing places and made some great friends along the way. We got to rip some gigs with Enforced and Skeletal Remains which was cool. We had an afterparty in Wiesbaden Germany that I’ll never forget.

Kevin: We’re trying to hit it hard and get on the road as much as possible next year. We want to play wherever we can. Let us come destroy your city.

E&D: What High Command song gets the craziest reaction when you play it live?

Kevin: On a good night the whole show tends to be chaos but I’d have to say ‘The Commanders Code’. I’ve seen some wild shit go down during that song over the years.

Kevin: Southern Lord has been great, they let us operate how we want to, and we’re psyched to be part of such an interesting label. Here are my top five Southern Lord releases in no particular order. Hex; Or Printing in the Infernal Method by Earth, Pink by Boris, Monoliths and Dimensions by Sunn, Pilgrimage by Om, and Celestial Lineage by Wolves In The Throne Room.

E&D: What have been some of the albums of the year for you?