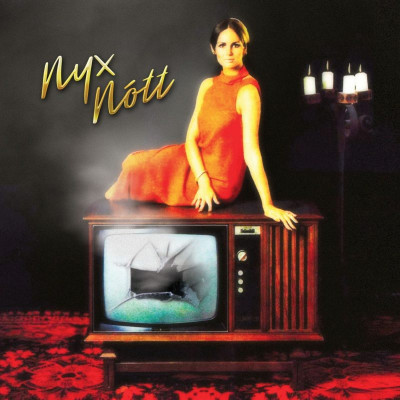 Themes From by Nyx Nótt

On the cover of Themes From a model reclines atop a sturdy old TV unit with a kicked in screen. It suggests 60’s exotica albums and budget 70’s compilations, hot hits of today in bright lounge style or a ragbag collection held together by the magic of television. You might imagine it’s just a visual gag, a wry contrast to another musical dark night of the soul. Up late and a few drinks in Nyx Nótt‘s first record, Aux Pieds de la Nuit, was by name and nature a nocturnal thing, weary eyed, turned inwards. Amongst its atmospheric brooding was a track of melancholy strings and splashing percussion called ‘Theme From’, the seed of an idea for an album of 90 second TV show themes.

We’ve all heard we shouldn’t judge a book by its cover, or a TV show by it’s theme music perhaps, but in this case it was the sleeve art that really tied the room together, so to speak. Nyx Nótt is the most recent project from Aidan Moffat of Arab Strap, although it makes more sense in the context of his previous instrumental incarnation as L. Pierre. According to Moffat the short opening-titles style pieces he made felt too silly so he filled them out, making them weirder and more exploratory, but he still wasn’t fully convinced until doing the cover. Themes From is a brighter, more colourful, record than its predecessor, a little more alert and diverse. Sleepless and distractedly channel surfing, scanning for the right mood, unable to settle.

Abandoning the brazen immediacy theme songs need to grab our attention and set a mood allows for something more complex and uncertain to develop. The first track, ‘Docudrama’, lays out a template, starting with busy percussion and slowly adding elements to the mix. At around a minute it punches in the hissing jazz cymbals that are one of the album’s constants and as we get into the third minute a sorrowful violin begins a leisurely loop. It is joined by more strings each adding a small circling part to the teeming whole. In the breakdown the string samples swirl around one another like mechanical ballerinas, pretty but unreal. As everything comes back in you realise how overloaded the track is, increasingly whipped up and yet still as insubstantial as a meringue.

The functional music Moffat is drawing on here is a rich sonic universe with a long half-life, bubbling up from the ocean floor periodically. Still somewhat scorned it’s often used as retro colour or a punch line in sample based music but not here. This doesn’t have the feel of any of that ‘soundtrack to an imaginary film’ business either. It’s too dense to accommodate dialogue or imagery and while it is consistently and pleasingly melodic there’s nothing really in the way of a memorable tune for your striking postman to whistle. Working with samples from professional TV and film music libraries Moffat aims for something beyond pastiche, building up tottering structures of mismatched elements to see where they lead. When it can take no more he names it for the type of show it reminds him of.

The squeeze box opening bars of ‘Swashbuckler’ certainly feel piratical and as it leaves harbour catching the wind in its sails the track becomes thrillingly bombastic and ridiculous. ‘Thriller’ also builds to a widescreen epic from low ominous piano and nerve jangle until the jazz shuffle kicks up. There’s a lot of jazz drums on this. Upbeat and fluid they feel full of possibility, yet they’re not really free. It’s an appealing sleight of hand, an image of jazz potentiality not the thing itself. On ‘Porno’ there’s so much jazz hiss it sounds like rain, a walking bass line lost on the neon lit streets when it ought to get home. Keening strings shimmer sickly, saxophones call out to one another, stray geese looking for love, solo in Soho. On ‘Tearjerker’ airy piano is balanced and then undercut by murky electronic glitching, eventually coming together on those bustling jazz drums again.

The library samples have a lifeless, glossy, surface. Your mind glides off the shiny sounds, which are evocative in the blankest of ways. You might think you were listening to a band but it dissolves and changes if you pay any attention. Moffat seems intrigued by this quality, not using a lot of effects or processing so much as smashing sounds off each other and piling them high to see what happens. The record’s more interesting moments court disaster, sometimes it seems like several tunes are playing at once. The acid squiggles that pop up amid the jazz trumpet in ‘Hardboiled’ are the most striking example, soon joined by clean funk guitar in an outrageous mash up of styles. At first ‘Caper’ suggests the impressive handling of a sporty hatchback on mountain roads, sax bubbles jauntily and strings dart like fishes in the bay. Slowly a weird undertow of electronic texture starts to drag backwards as if the whole thing is going to spiral out of control and down the cliffside. Ultimately, calamity is avoided but the spin along the edge is fun.