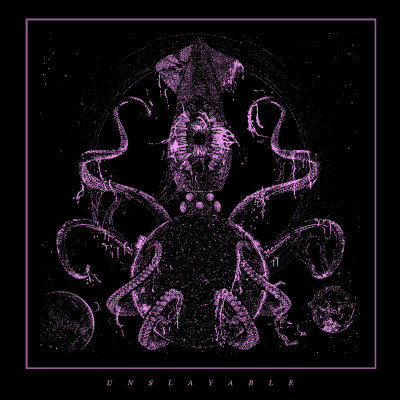 Post pandemic the Scottish music scene has been delivering some of its finest material in decades and joining this throng of releases is Glasgow based Tyrannus. Debut album Unslayable adds black-metal predominantly to death but also twists into thrash to create an entertaining ride through eight tracks of anti-fascist, Lovecraftian dark atmosphere and a masterful mix of genres.

he atmosphere of the album is unrelenting and although there are so many flashes of different styles they all have to reach through the dank mist to hammer their points. The band manages to do both with aplomb and the run of ‘A Worse Reality’, ‘The Flood’ and ‘It Taketh’ has a barrage of blasts, riffs and solos but also has notions of space and room to breath especially the near jazz guitar interlude in ‘The Flood’. There are full on spandex solos at points throughout the album but at the same time the weighty drums continue to batter the dark sense of foreboding.

Even the opening instrumental ‘A Cruel Dream’ which comes back midway as ‘Lake of The Undying’ looms heavily like a constant mist hiding what could be coming next. The band is not afraid to break up songs either and the title track falls at the halfway mark after a blistering opening before hitting hard for a rousing ending. These techniques have been placed together so well on the album that it galvanises and empowers each track to head in a different direction as well as creating a constant suspense.

Unslayable is a triumphant debut which manages to entice listeners of a number of genres and satisfies them all. The vocal delivery is clear and ferocious, the drum work of Alisdair Dunn (also of local heroes Ashenspire) is a constant driving force and the guitar and bass are always reaching for routes that may not necessarily be expected. The outcome is an album which has turned many heads this year and bolsters the good fight against fascism in the black metal scene.