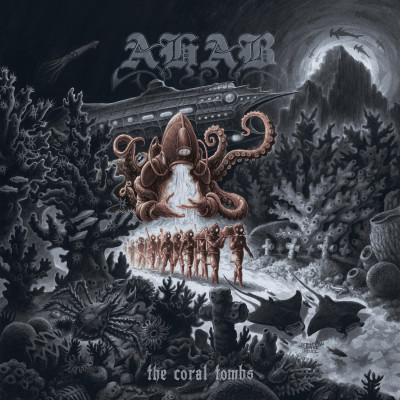 The Coral Tombs by Ahab

With the speed and energy that Ahab leaves the blocks on opener ‘Prof. Arronax’ Descent Into The Vast Oceans’ you would never guess this was the band’s 19th year in existence. With The Coral Tombs, Ahab continues the trend of building on its own foundations to reach into new territory without losing grip on the sounds that got them here. Over the 7 tracks various layers and journeys of a 20,000 Leagues Under The Sea concept album are explored in a way that is everything you expect from Ahab and more.

Along with the blistering start to the album ‘Mobilis in Mobili’ offers up flashes of tremolo picking and thunderous drums that pushes energy into their traditional heavy doom sound. The other aspect that has been developing through the last couple of albums that really comes out here are the clean vocals of Daniel Droste, who is without doubt one of the most talented vocalists in the whole doom genre. In some of the lighter moments of ‘Colossus Of The Liquid Graves’ and ‘The Sea As A Desert’ the music really fits into the void departed by the now more acoustic 40 Watt Sun and Droste is more than up to the level of Patrick Walker.

Ahab has always been a purveyor of a sheer atmospheric pressure and that unfolds further on The Coral Tombs. Be the guitars sparse and strummed or dark and heavier there is a constant feeling of being static in motion. Like falling to the sea bed and not reaching it before the track ends or awakening to find you need to trudge through a valley of mud and bones with progress being made but getting nowhere, or simply just floating in the middle of a dark dense oceanic layer with no panic and a feeling of relaxation. The final four tracks on the album all offer such a spatial aquatic experience and it’s a sensation that heightens the more attention is given to it.

With The Coral Tombs, Ahab has shown its interest in exploring and progressing. There are still plenty of moments of gravelly vocals, slow heavy doom and crushing weight but these have also been tapered with a pelagic lull, exceptionally powerful vocals and a great sense of breath. Ahab began as a band that crushed and smothered in heavy layers and here, 19 years later, they are showing that it’s possible to exist in the aquatic environment and adventure just as Arronax, Conseils and Nemo experienced.