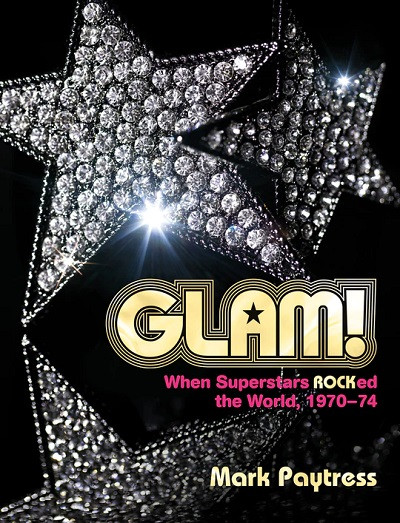 Glam! When Superstars Rocked The World 1970-74 by Mark Paytress

It’s time to put on your make-up, platform boots, outrageous clothing, and orange hairstyles with glitter all over your face and take a trip back into the creative world of ‘70s glam rock. And how sweet it is for us to look back, and reflect to your young teenage rebellion years whilst having the posters of Marc Bolan, David Bowie, Alice Cooper, and Slade all over your bedroom, cranking up the 45 RPMs, LPs, and reading NME, Mirabelle, Melody Maker, and Record Mirror.

Mark Paytress, who is the Bolan aficionado, has taken us into his incredible time machine to a scene where the music not only influenced the late ‘70s punk, ‘80s hair metal in the States, and the post-punk scene in the UK, but how the genre had a huge impact between fashion and sexual identity. With a striking cover of the stars shining in your face, Glam! When Superstars Rocked the World, is the exact opposite.

Reading this book is like going through your old scrapbook. You have the pins, posters, articles, musicians, and reflections from those who in the middle of the scene. Take for example, New York Dolls guitarist Sylvain Sylvain, who sold out for two nights in November 1973 at the Biba Rainbow Restaurant, described from admiring Rod Stewart & The Faces and his appreciation of Marc Bolan from his Tyrannosaurus Rex years before hitting it big from hippie flower-power to superstardom with T. Rex.

Not to mention Kris Needs who would later go from being a secretary, running the fan club for Mott the Hoople to editing Zigzag magazine between ’77 and ’81, and would later write biographies on Primal Scream, Joe Strummer, and Keith Richards. Paytress himself has brought out a lot of amazing ingredients that had just come from the kitchen with a delicious aroma.

He’s done his Mundy detective work to go through each detail to get your old records out of the cupboard you haven’t played for a long, long time. It does make you a kid all over again admiring the heroes of the decade from 1970 to 1974. Most of them I haven’t seen before including the Italian poster for Roxy Music’s second single ‘Pyjamarama’ with its ‘70s nod to the art deco-era of the ‘40s.

It does have that pre-decopunk vibe when you take a look at that. And of course the 45RPM single of MUD’s 1973 classic ‘Dyna-mite’ which would later get its foot-stomping revving groove in the 2019 video game, CONTROL starring Courtney Hope as the current director Federal Bureau of Control, Jesse Faden.

And I was also surprised that the Strawbs, fellow unsung folk-proggy heroes got mentioned when they dipped their toes into the glam waters from the Bursting at the Seams-era with ‘Backside’ and ‘Laydown’. Not to mention John Peel who played Roxy Music, Bowie, and Sweet, despised Slade at first. But he gave them another shot after playing ‘Get Down and Get With It’ on his program whilst giving Tony Blackburn a massive headache.

It proved that he had a change of heart and knew that Slade was a band that had attitude, harder edges, and right down the line. The spirit of glam rock will never die. This book will be in your shelves for the New Year and give the genre, the massive amount of recognition it deserves. Yes it was campy, yes it had attitude, yes it was poppy, and proto-punk at the same time, but the music will make you hit the dance floor and do the strand, do the dyna-mite, raising your glass to the Billion Dollar Babies, and as Bryan Ferry would say, “So I spin-a-disc around and around. And slide the needle in the groove…”

So Get It On and Bang a Gong for the Children of the Revolution to be a part of the Starman and the Metal Guru’s space ship with Mark Patyress handling the controls to make the jump to light-speed. Because it’s a ride you will never forget.