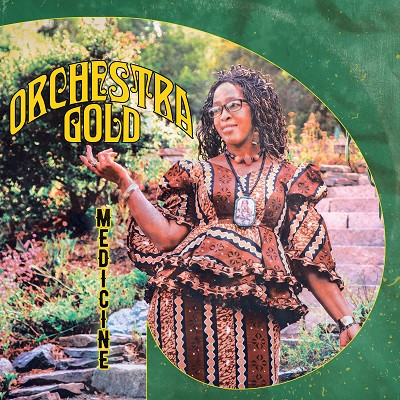 This Oakland-based band, who have been around for nearly 17 years, have unleashed an ear-listening experience of pure African psychedelic funk that is hypnotic, jaw-dropping, and right to the point. I’m talking about Orchestra Gold. Combining the traditions of Malian and the usage of Bambara language, it’s all done from the mind of Mariam Diakite. And once she sings, Mariam can knock you down with one massive punch after another.

Spaced out wah-wah guitars, reggae-like brass sections, and bass-like walks, it’s very much opening up a door to a parallel universe, witnessing a young Os Mutantes jamming with Orchestre Poly-Rythmo de Cotonou with David Byrne handling the production sessions, and being an older brother to them.

The band’s third album Medicine, is like a stick of dynamite, waiting to explode at any second. Both Mariam and Californian multi-instrumentalist Erich Huffaker, have kept the Orchestra’s music flowing nonstop with five enduring pieces.

The opening track ‘Koniya’ has a swirling dance-like groove that plays into a Bebop sound in the styles of Miles Davis’ ‘All Blues’. With echoing reverb effects and menacing guitar overtones, it plays in with this call-and-response motif that makes you want to join in the band’s response to the samba.

Kierbel’s drum work and Luke’s bass lines from the reggae sounds of Toots & The Maytals, the blaring baritone sax from Chris Hoog, gives them a lot of responsibility on ‘Baara Nyuma’. It’s very much like where Bob Marley and Jimmy Cliff had teamed up and created their own response to the ‘60s garage rock movement, and giving both The Seeds and The Electric Prunes, a big-run for their money.

‘Gende’ sees Mariam crying out to the gods as she creates this intense dance while the band members walk on this dangerous tight-rope with her in melodic form, before the volcanic trip-hop groove gets down to business. The rhythm section keeps the tightrope even tighter by making sure it doesn’t snap.

The brass section between Chris and Luis, are having a ball with each other before they reach towards the mountain top while ‘Dia Ye Banna’ sounds like a futuristic Blaxploitation score with Pam Grier, finishing up business one last time as Foxy Brown as she starts to kick a huge amount of ass like no other.

You can imagine this climatic battle scene happening in front of your very eyes as temperatures start to rise with this Camel-sque nod to ‘Lady Fantasy’ before the echoing sounds of Mariam lands down back to Earth. You vision her in a trance as she increases the level of speed for the brass players to lay down enough heat for the rhythm section to go into in the middle of the ‘Segou Heat’.

If you haven’t heard Orchestra Gold yet, you are in the ride of your life. Not only they get down to business with Medicine, but they have a big, massive party on your headphones, 24/7. And this album will definitely become a classic in the years to come, and it will be talked about, for a very long time.