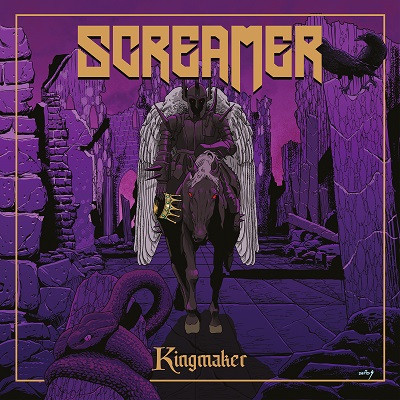 There’s a lot of engines all revved up and ready to go. You feel the intensity, the fires burning, the riffs, and epic-like duels coming at you, counter clockwise. For Sweden’s own response to the new wave of British heavy metal, Screamer are a band that have proven themselves that they can deliver more knock-out punches, and never backing down without a fight.

With four studio albums and one live album in the can, they are so damn good, you may close your eyes and imagine it’s the late ‘70s, early ‘80s all over again by reading both Sounds and Kerrang magazine from your local music store. Their latest release on the Steamhammer label entitled Kingmaker, shows that the quintet are all geared up and preparing themselves for the massive battle that awaits them.

For the high vocal range of Andreas Wikström, the doubling guitar techniques between Jon Morehim and Dejan Rosic, the rumbling drum work from Henrik Petersson, and galloping bass work by Fredrik Svensson Carlström, they bring enough weapons to raise hell like a motherfucker!

The centrepieces that are on Kingmaker, is like one kill after another. The Uriah Heep organ-sque turned Maiden-like punch for ‘Chasing The Rainbow’, it has a roaring sound as far as the eye can see. Both Dejan and Jon, lend Andreas a helping hand to reach the swirling colours with its sonata-like midsection as they take turns with their solo exercises they’ve been working on.

‘Hellfire’ has the fiery torches of the British Steel-era of Judas Priest. With its comic book illustration imagery from Conan The Barbarian and Red Sonja, you feel Andreas coming down the mountain with his bloody sword, killing the monsters after another as he sings with mighty pitches, shouting out to the gods of Asgard.

But it’s the duo that are coming into the forefront once more with the operatic touches on ‘Burn It Down’. It details the disturbing scenes of corruption and greed while the visuals are shocking and filled with disbelief, you get a sense that the politicians are rubbing the faces with a huge amount of cash behind closed doors, not knowing how much damage they are doing to their followers.

‘The Traveler’ has some very mystique visuals in the song. Describing the characterisation of the person going back and forth through time and space, he tells the people that they’re all he’s got to stop the madness. With its synthesised midsection, he’s also letting them know that he’s a human being stuck in the same world as they are.

The howling cries of a wounded comrade on the ‘Fall of a Common Man’ becomes a ticking time bomb, waiting to happen. The loss of a friend, the pain, the suffering, and getting revenge becomes a galloping ride into a vicious attack for Fredrik as he unleashes a self-defense routing on the people that hurt his brother. And it’s like nothing you’ve ever seen before.

Because Fredrik, he will whoop your ass nonstop until you plead for mercy!

All in all, it’s a killer way to start 2023 off with a big bang for our fellow comrades to unleash the massive cannons to erupt. And to play pure, power, epic-like metallic stories at its finest, Screamer have delivered the goods. And you better prepare yourself to be in the battlefield with them. Because once everything is clear as the dust settles from the massive bloodbath. They. Will. Be. Standing.