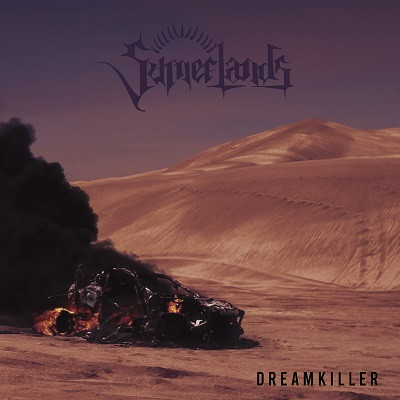 Metal has always kept the fires burning like a massive cargo that’ll never burn out. It doesn’t leave you, it stays with you, for the rest of time. For Philadelphia’s response to the metal scene, Sumerlands, who have been around for ten years, have kept the train chugging for a long time. And they will keep on going until they reach the light at the end of the tunnel.

Their latest release on the Relapse label entitled Dreamkiller, is like looking through a crystal ball and witnessing the danger, and the threat, that is approaching the 31st century. Led by producer extraordinaire and guitarist Arthur Rizk (Kreator, Eternal Champion), and members from Magic Circle and Pagan Altar, Sumerlands get down to business without anyone fucking around.

Bassist Brad Raub, Drummer Justion DeTore, and new vocalist Brendan Radigan, lend Rizk a helping hand. Following to their 2016’s sole self-titled debut, Dreamiller is a captivating release. Yes there are elements to their melancholic beauty, but strong forces of the Dio-era of Black Sabbath, Dokken, Frontiers-era of Journey, and Bruce Dickinson rolled into one.

‘Edge of the Knife’ gives you a blistering approach of a Scorpions-sque riff texture that Rizk channels in the styles of Matthias Jabs. You can just vision a warrior alone in his war room, knowing that he has an uphill battle tomorrow. And it’s going to be a bloody mess like no other.

The title-track will make you want head-bang, nonstop! Speed-metallic riffs, attacking effects on the drum kit, and Radigan leading his fellow comrades into the war zone, you can just imagine an epic midsection coming at you with a Hoedown-like arrangement with some arpeggiated textures.

Radigan has a hell of a voice. It gives you a door-opening experience, witnessing this operatic sound as he hits those high notes and carrying the torches of Dio, Dickinson, King Diamond, and Mastodon’s Brent Hinds. He has done his research very well by sticking to his guns and has fought the good fight to honour the four horsemen.

Since I’ve mentioned Mastodon, take for example, ‘The Savior’s Lie’, it feels like an unearthed track from the Crack the Skye sessions, and continuing where the sea shanties of ‘The Prophet’s Song’ from Queen had left off. That and the AOR approach of ‘Heaven’s Above’ will make you want to dig out the almighty hammer of Mjolnir and have massive full power like there’s no tomorrow!

The closing track ‘Death to Mercy’ sees Sumerlands tipping their hat to the late, great David Bowie. It’s sung in the styles of ‘Afraid’, from his 23rd studio release Heathen. There’s the thunder, galloping structures, calling out to a loved one, and the wars that’ll never end.

Detailing the situation getting worse every day, Sumerlands have notice that their fellow comrades have fought every struggle in the battlefield. Yes they’re banged up, wounded, and exhausted, they are still standing. And they will keep standing for a long, long time.

Dreamkiller is the quintessential metal album that the band has unleashed. Yes the band have been following the yellow brick road and reaching to Emerald City, and they’ll never know what will happen next. But it is going to be one helluva ride that Sumerlands are still on. And it’ll never, ever stop.