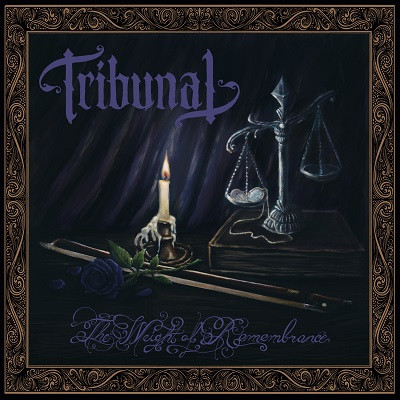 The Weight of Remembrance by Tribunal

Like a massive stick of dynamite ready to explode at any second, this duo coming all the way from Vancouver, are the ones that’ll lit the fuse as they come out of the black velvet curtain to reveal their big massive plan to conquer and attack. That band of course is Tribunal.

The duo considers cellist, bassist, vocalist Soren Mourne, and guitarist and vocalist Etienne Flinn. With a combination between death and doom metal inside a gothic cathedral that was designed by H.R. Giger, their sound takes you back to the ‘80s where the metal scene was more than just the big names, but like a rumbling volcano ready to boil a massive shit load of lava, terrorising the Boy Bands and putting them to waste!

The duo’s debut album, The Weight of Remembrance, released on the 20 Buck Spin label, proves that this isn’t just a flowery debut, but a brutal orchestral attack that is waiting to happen. There’s elements between Candlemass, Napalm Death, Apocalyptica, and Violent Femmes with Jess from Jess and the Ancient Ones taking over vocal duties.

The rain pouring turned sorrowful piano work on the instrumental ‘Remembrance’ gives listeners a sense of a tragic loss set in this futuristic wasteland scored by Hans Zimmer while the rumbling atmosphere of ‘A World Beyond Shadow’, lets the townsfolk know that a monster is on the loose and creating havoc. So finding shelter and not becoming the creature’s cannibalistic dinner, which becomes the tricky part.

Brutal growling vocal lines, followed by angelic beauty, ‘Of Creeping and Crumbled Stone’ takes you inside someone else’s dream, filled with macabre, death, bloody aftermaths, and the heavy thunderstorms that come even closer than what you expected. ‘Apathy’s Keep’ is like an unearthed score from Graeme Revell’s 1994 sessions for the 1994 supernatural, gothic superhero film, The Crow starring Brandon Lee.

You feel Eric Draven’s take of revenge, you feel his pain, and you feel the anger, pain, and the loss he went through. Tribunal created an unearthed composition by rising from the grave with snarling effects coming at you from one place to another.

The string sections that Soren creates in the final section of the song, is to call the angels down from the heavens, and give him the last rite before preparing himself to go into the afterlife. The closing 12-minute piece of ‘The Path’ lets us in of a tragic but sombering end.

The epic howling gesture, makes you think of a combination between Terje Rypdal and Siouxsie Sioux with Ennio Morricone cooking dinner for the two of them, makes the best of both worlds. I love how there’s a section where not only Tribunal channels Ennio’s compositions, but the nod to James Last’s ‘The Lonely Shepherd’ in the epic, Tribunal have suddenly walked into a spaghetti western territory. And this time they ain’t backin’ down without a fight

Their music may not be everyone’s cup of tea per se, but Tribunal’s debut has a strong sense of power by adding more fuel to the fire without hitting the salt watery landscape in the middle of the Atlantic. If you love gothic, doom, post-rock, and death metal, then Tribunal are at the door, waiting to perform, and give you a show, that’ll haunt you for many years to come.