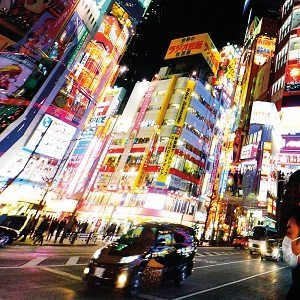 Have you ever heard an album that you don't know how to describe? Well, when I found Waking Up To The Fire of North American band Drop Electric I didn't find the words to accurately say what it made me feel. It was until the 10th time that it started to be clear to me what these musicians are doing and it’s pretty good. I tried to go deeper into their music and history and even when I did not find much, I understood that having multicultural members is the reason their music is that different.

Waking Up To The Fire is their second album but first one released by Lefse Records; for this effort they decided to change their perspective, fans will notice that the dramatic post-rock/ambient soundscapes disappeared and instead we find a bunch of electronic atmospheres blended with distorted beats, tribal percussions and now in the foreground the structured and dynamic voice of Kristina Reznikov that leads the Drop Electric’s project into a world full of darkness and desperation.

'Other Planets' is the opener, a song that welcomes us with a solemn atmosphere that combined with Reznikov’s voice sets the perfect start. It is followed by the song that gives the title to this album, where synths, some monotone loops and distorted voices create a catchy melody. The third track is 'Blue Dream', a synth-pop melody that even when its sound is happy and danceable, hides a somber hint that is perfectly pictured in the official video that was produced as promotion for this LP.

'Wack Rapper Meets Defeat' comes as an instrumental interlude that lasts only a little more than a minute. Some trip-hop can be listened in it. After this experimental break 'Higgs Boson' fills the air with a nostalgic and reflective ambient that extends to 'The Coming Storm', another instrumental interlude, and to 'Carl Pagan' a song that seems slower than it really is, the voice sounds extremely sad and expresive but doesn't fit the rest of the song because the beats are too fast and noisy.

At the end of that confusing moment 'Starfox' begins with an explosion of synthesized beats that try to hide the anguish of the vocals and actually make us forget about the almost unrecognizable lyrics and get us to dance for a while. 'Lucille' has an intense electro pop feel, the driving beat is good but at this point the overuse of keyboards start to be too repetitive and again the lyrics can't be completly understood. The 10th track of the album is 'Stack Overflow', a piece that uses too many elements and I honestly think that the album would be better without this odd track.

The last cut of this record is called 'Among Dying Dreams', an instrumental song that reminds us of their debut, its peaceful atmosphere and piano crescendos deliver a quite remarkable melody, it is simply the most beautiful song of the album.

With Waking Up To The Fire, Drop Electric showed that they did not want to repeat what they did in their debut, the question now is ¿For their third album will they try a new sound or will they go back to their roots and recover the Post-Rock influences?