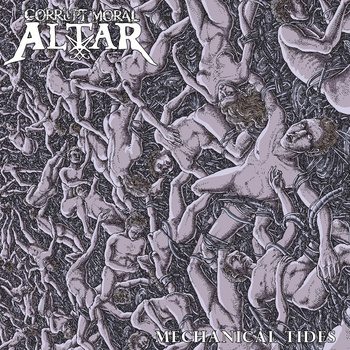 Corrupt Moral Altar don't fuck around. Since releasing their Needle Drugs demo not even two years ago, they have emerged as one of the UK underground's brightest hopes, bastardising elements of grind, sludge and hardcore into a potent mix that has seen them repeatedly decimating dingy venues up and down the country. On the blistering Mechanical Tides Liverpool's angriest young men have taken full advantage of their first full-length recording to leave most other bands in the dust.

Opening track 'Father Tongue' begins proceedings in furious fashion, far more straight-ahead grind than anything they've done previously. The hooks are still there, they're just sharper. By contrast 'Blood Harmony' is a painfully slow crawl with an almighty chugging bastard of a riff. Both tracks demonstrate what sets CMA apart, in that they're not merely fast or slow for the sheer sake of it. That they can go from blastbeats to funeral marches itself is not impressive in itself, but the fact they can do so while writing songs that will stick in your head after the album is over is. Yep, actual songs, with discernible vocal lines and catchy riffs, things that so many extreme bands abandon in favour of extremity itself.

'Line Check' is a hulking brute of a track that'd reduce any soundman to a quivering wreck, while 'Wire Mother' might be one of the band's most ambitious undertakings to date, encompassing everything from their usual grind passages and hardcore stomp, to a downtempo sludge crawl, before deteriorating down to little more than a scree of noise, all while never losing one iota of their vitriolic intensity. That they launch right back into business as usual on 'Gin Dreams' is a demonstration of just how easily Corrupt Moral Altar are able to incorporate several more left-field elements without coming across as contrived or thinly stretched.

'Closed Casket' continues down the same dark path, while 'Sweet Talk' is a far more feral proposition. 'Admit Defeat' begins with plaintively sung lines, underscored by discordant guitar and clattering rhythm. The two contrasting styles seem to clash, never quite hanging together properly, but it's still an interesting experiment, and serves to break up the momentum nicely. Yep, definitely just used the word 'nicely' in an extreme metal review.

The one-two combo of 'Garland Greene' and 'River Blind' both alternate between neck-breaking ferocity and catchy gang vocals, with a couple of oddball guitar passages thrown in for good measure, before a short acoustic passage (!) leads into final track 'Insect Politicians'. Probably the most vicious cut on the whole album, it collates everything that makes Mechanical Tides so damn good into a single track: skull-rattling blasts, face-shredding riffs, throat-shredding vocals, noun-verbing bass, bizarro electronic passages, and a closing scream so caustic you'll feel sorry for your speakers.

Few bands with Corrupt Moral Altar's live intensity are able to capture it on record, and fewer still manage to maintain it across a whole album. Mechanical Tides not only achieves these feats, but may well be one of the most visceral and varied albums released this year.