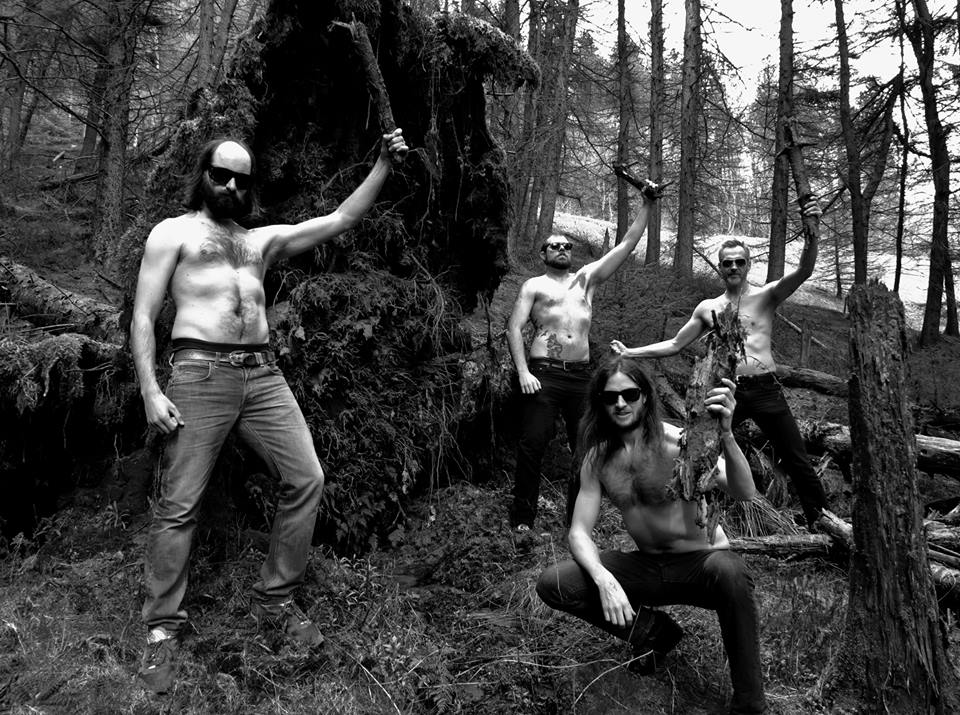 Bad Guys are ridiculous and their new album Bad Guynaecology, out on Riot Season in March, is ridiculous. Long-term fan boy Richard Collins had a chat with them to find out what’s happening on Planet Bad.

PJ: Fucking busy at the moment, organising the album launch, the UK and European tour, finishing off the video, listening to test pressings, doing artwork, t-shirts and merch… the list goes on, can someone do all this for us please? We just want it all to be done so we can hit the road and play the shows. That’s when the real fun begins.

Stu: Yes, the fun of driving all day, needing a piss and playing to no-one.

(((o))): You are tricky to describe as a band. You don’t take yourselves too seriously, but there’s some really fucking power behind it. How would you describe yourselves and how did you become the unique rock ‘n’ roll experience that you are?

PJ: It’s actually quite easy to describe our music, rather than getting bogged down in the details, we are just a heavy rock band, we do fast and slow, loud and heavy, if it drives, then we give it the steering wheel.

Humour is clearly important to us, but it’s a mistake for people to write us off as a joke band, there seems to be a real wall of prejudice you hit in the music industry if you use humour, people are scared of going near you, it never used to be a problem for metal bands to be funny, now it gets shrugged off as being ironic.

All the reviews so far for the new album have been great though, they seem to be getting it a lot more now. Maybe the jokes are getting better?

PJ: This is a true fact. It was the Melvins/Mike Patton ATP at Butlins, Minehead, 2008, the first of about 4 chalet gigs we did. Smuggling the gear in and getting a load of drunken people in the chalet was the easy part, stopping the chalet getting trashed and getting everyone to leave without head-butting the security wasn’t so easy.

We had no songs, just a handful of riffs and Stuart sung lyrics from his notebook. It kind of all went downhill when Jared from the Melvins climbed through the front window stepping on the mains plug to my amp, ripping it out of the socket. Butlins slapped a £450 fine on us for rebuilding the chalet and took our wristbands. We were back in the festival with in an hour. 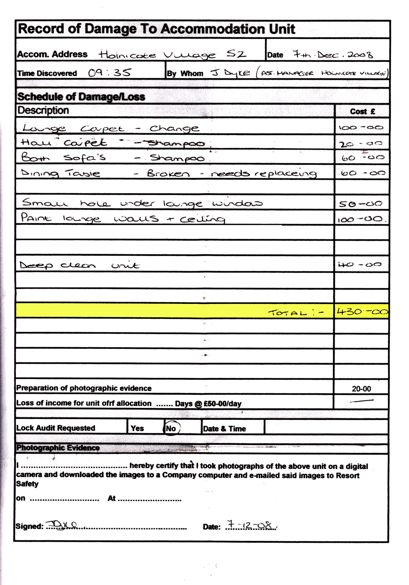 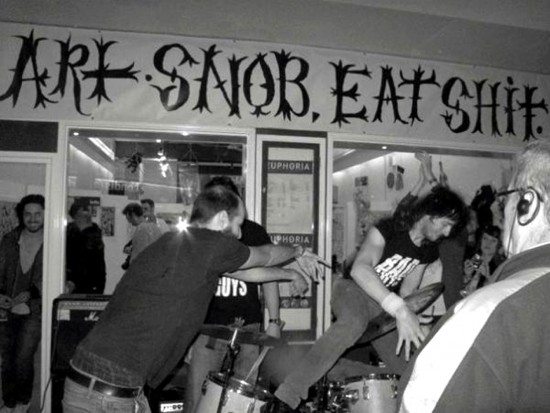 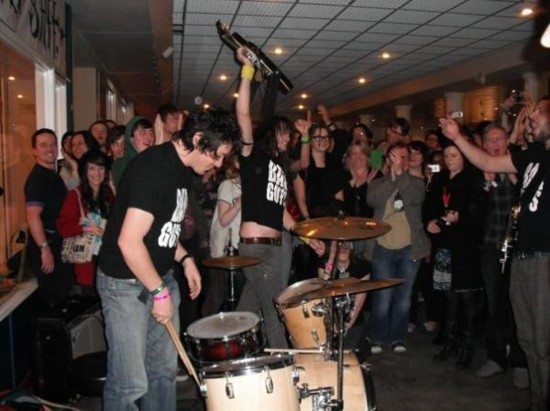 (((o))): What’s Bad Guynaecology all about? Is it why you got kicked out of Med School?

Stu: The name is just an innocent play on words and in some small way a tribute to Prince’s Musicology, which is weird isn’t it, because that was a shit album. The phrase was thought of about five seconds after we thought of the name of the band, but it’s taken until now to use it. It’s not meant to be offensive or anything but some people might be offended by it. I know I am.

Stu: It’s an old picture of my dad.

Dave: Didn’t PJ say we should do a track called ‘Crime’ and Stu chose to write that story?

PJ: I struggle to remember anything past 2 days ago.

Stu: I think that’s right. Anyway it’s not a true story, it’s a piece of genre fiction in the vein of The Godfather Trilogy. It’s the story of the very start of a criminal career, and although it’s not at all implied in the track, we leave it up to the listener to imagine the rest of the protagonist’s life story, which ends up with him as the head of a family, but not a normal family, a criminal family, like in The Godfather Trilogy. In the end he gets shot to bits like Scarface.

Stu: Yes it is and this is a work of ‘anecdotal embellishment’. There is a problem with it around my area and specifically the short but secluded path that leads to the rear gate of my house. Consequently I am always finding used condoms and tissues left in my back passage. I have learned that novelty condoms are apparently fine with both parties, which must help lift the mood a bit I guess but in all honesty it’s a grim situation.

Like any liberal minded middle class white guy, I’m desperate not to offend anyone, so I approve of a woman’s right to do what she wants with her body, disapprove of any form of exploitation of her body by pimps, disapprove of men paying for sex, but I am fine with people doing what they want on the whole, as long as it’s consensual.

But ultimately, I would rather no sex took place in my back passage at the end of the day. Or any time of day. Without my consent.

Also, we’ve made a video for this track that will be out very soon. It features fellow musicians Gordon and Tracey from top rock outfit Luminous Bodies as the sex purchaser and sex worker, respectively and with respect. I’d like to give a big shout out to those guys, they were excellent, and they stayed in character throughout the shoots, and the weeks between shoots, and I think until now, in fact. Anyway, it’s hard to make something about a serious subject and make it fun, but I suppose we’ve made a good fist of it. You’ve gotta laugh haven’t you? 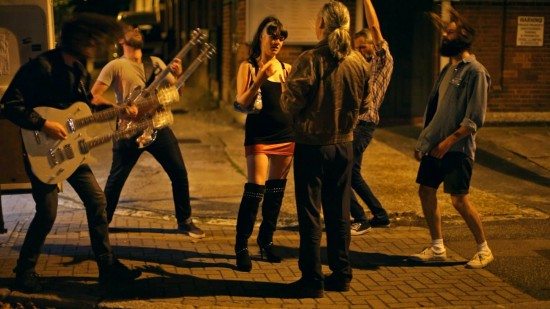 Still from video – “Prostitutes (Are making love in my garden)” 2015 to be released later this month.

(((o))): You guys have got a reputation for being an amazing live band, are there any memorable or funny moments from the stage that stick out in particular?

PJ: The best gigs have generally been when there was no stage. The fields, the chalets, the kitchens, the bank of the Thames, the 4th plinth in Trafalgar Square, naked in a life drawing room at the Royal Academy of the Arts. These gigs are where the wildest things have happened, but it’s been a while since we did any guerrilla gigs.

In recent times Dave our guitarist nearly blinded a guy at the Crobar 13th birthday gig in Soho with his extremely brutal, aluminium necked guitar. A couple of enthusiastic Swedish guys got a bit too close and the combination of banging head and swinging guitar resulted in a massive bleeding gash for one of them, when the guy stopped seeing stars and the bleeding was stemmed, he thought it looked great and his mate was jealous he didn’t have a scar to go home with. The Swedes know how to have a good time.

Stu: I don’t remember anything because I enter a zone where I become pure energy and perform precisely and uniquely in the moment and only for that moment, moment to moment. Once it has passed I have no recollection. Although I have seen some videos. But nothing unusual stood out particularly. 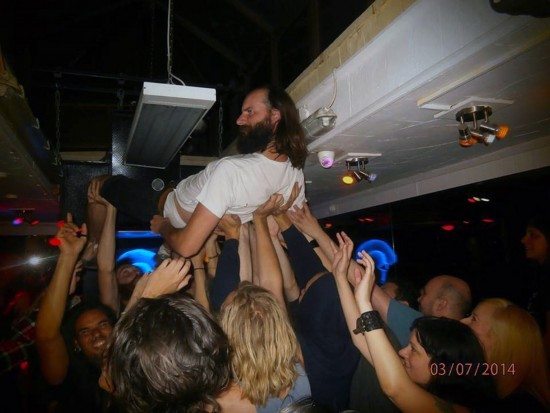 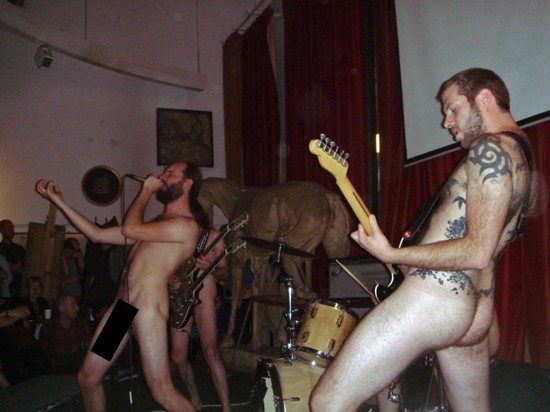 Postgraduate life drawing class at the Royal Academy of the Arts, August 2011 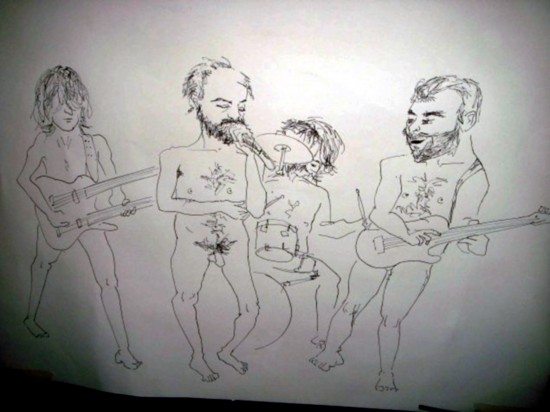 Tamas: I don’t know there are too many best bands in the world, I wasn’t playing with Bad Guys yet when Circle played… Bo Ningen maybe in Liverpool?

PJ: This is hard when there are 4 people in the band.

Stu: Fuck these boundaries, let’s do three each.

Stu: We would be a human, king of all the animals, destroyer of worlds, consumer of light entertainment.

Tamas: Or Wasps. They are quite bad.

Dave: We are moving into a new studio where the lease is in my name and we’re relying on other bands paying rent. It may be the most foolish enterprise I’ve ever engaged in.

PJ: Move into the new studio, yes, playing the launch gig for Bad Guynaecology on Friday 13th March with Henge and Sex Swing at The Lexington in Islington. And the UK tour, Euro tour; I’m quite excited to be going to Romania this time.

Dave: I’m currently sorting out a tour around Poland, Ukraine and surrounding countries in October.