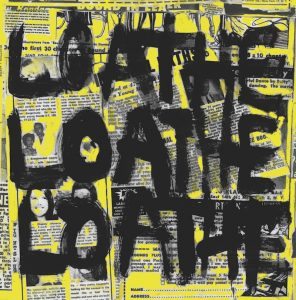 Loathe is a mercilessly nasty record, which sees Düsseldorf’s Nightslug dispense with doom in favour of a far more vicious approach. The half an hour of hateful filth on offer here is the stuff of nightmares.

The nightmare begins as ‘Vile Pigs’ opens with a gnarly-as-fuck bass rattle, which soon becomes the driving force of the track. It prowls back and forth like a vicious junkyard dog, occasionally snarling feedback and growling vocals. It doesn’t sound dissimilar to Unsane’s ‘Scrape’, if they’d recorded it in a crack den using instruments they’d just stolen at knife-point that is.

Never has a track name been as apt as the album’s title track ‘Loathe’, which practically seethes with hatred. Again the bass is firmly at the forefront, with vocals almost completely buried in the murk. Not like you would want to discern the bilious words being spat forth, unless you have seriously low regard for your self worth. You get the feeling this isn’t exactly a love song…

‘The Thrill Is Gone: Repulsion’ takes things down a gear to a plodding dirge, with each sickening thud of the kick drum akin to the fire extinguisher scene in Irréversible. It is a mercy when it ends. The breakneck pace of ‘Under A Bane’ is all the more disorienting after the preceding song, but incase it wasn’t bleedingly obvious already, this album is not meant to be a comfortable listen. It’s more like the perfect soundtrack to taking a drug-addled stroll into oncoming traffic.

The album’s centrepiece, ‘Disease’ is as close as Nightslug come to out-and-out doom, a deviation from the relentless pummel of the rest of the tracks. Unfortunately it serves only to kill the previously unstoppable momentum, and seems to meander aimlessly for much of it’s running time.

The cement mixer churn of ‘Pure’ has a similarly nauseating effect to early Godflesh, especially as it gradually deconstructs itself towards the end, until nothing is left but the piston-like drums and howling of machinery. The closing track has a similarly quasi-industrial vibe, recalling a sludgier take on Ministry’s ‘Scarecrow’ with its Bonham-on-Mandrax cacophony and white noise vocals. It’s a far more effective use of slow tempo than heard earlier in the album, and brings things to a close in a suitably uncomfortable fashion.

Loathe is one of the vilest, angriest records to come out this year. It is fucking excellent.