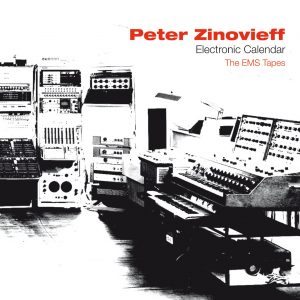 Imagine, if you will, the heroic days of early electronic music and the bubbling, fermenting crucible that brought us names now whispered in legend: Delia Derbyshire, David Vorhaus, Daphne Oram, Robert Moog, and so on. A time that would light the blue touch-paper under bands such as Kraftwerk, Silver Apples, White Noise, and influence the sound of a generation.  From clever Oxbridge graduates experimenting in computers, mathematics, and soundwaves in sheds, it was only a short hop to the glitter, the glamour, the melodramatic high-camp of Eno twiddling his knob on Top of the Pops with Roxy Music, Pink Floyd’s over-analysed and seminal Dark Side of the Moon, the raw machismo of The Who’s Won’t Get Fooled Again. Such heady days! What larks Pip! What larks! And of course, there in the middle of this maelstrom was Peter Zinovieff.

The son of aristocratic Russian émigrés, Dr Zinovieff followed his ambition to create a space where science and music could meet and more importantly collaborate, creating not only some of the early synthesisers and samplers but a recording studio that was frequented by – well – anyone who we now consider to be rock and roll royalty. Bowie, McCartney, Fripp, the aforementioned Eno all beating a path to his door.

This double-CD package then, is a long overdue retrospective of Zinovieff and with renewed and growing interest in figures such as Derbyshire, Oram, and the BBC Radiophonic Workshop, it’s not before time either. Curated by Pete Kember from Spaceman 3, and released on his Space Age Recordings label the compilation covers, chronologically, early experiments in music with Harrison Birtwistle, Hans Werner Henze, through to later solo-work, and work with Alan Sutcliffe, Justin Connolly, before closing with his last recorded track in 1979, and showcasing the electronic innovations that would make Zinovieff’s name.

Disc one contains seven tracks of the most early work. These are very experimental pieces, a world away from the rock music they would later influence. Cold, atonal, unsettling musical tendrils reach out to you from these recordings, probing your ears for weakness. These could easily be the themes or background music for an intelligent, minimal, dystopian science-fiction film. Silences are slowly filled with with seemingly inorganic resonances, deep intelligences from the beyond claw at all your musical certainties and expectations. At times these can be deeply challenging for the listener, particularly on longer tracks such as ‘Chronometer ‘71’ and after nearly eighty minutes you’re left feeling that in the 1960s and 1970s these sounds must have come from another dimension – let alone another universe. Even in 2015 where we have, to some extent, trained our ears to accept the sonically unexpected, you are left wondering how to describe what you have just heard. It’s work that creates atmospheres, which is why no doubt it appealed to Eno (who would make the creation of atmospheres his own with his experiment in ambient music). There’s nothing ambient here, however, this is very different, ominous, pleasingly uncomfortable.

Disc two has more numerous tracks, still in the experimental vein, and no less challenging than the first, but pushing the boundaries of what Zinovieff’s machines and recording studio could achieve. By twists and turns we’re delivered, time and time again, deeply startling compositions that unsettle and intrigue. Starting with the fragment of ‘Agnus Dei’, we’re given a frightening but compelling consideration of what praise to a higher being could be, very much in the mode of a composer such as György Ligeti. Along the way  to the closing track, ‘Now’s The Time to Say Goodbye’, we’re treated to compositions that defy categorisation – or force you to make up your own – proto-electro, sonic-noir, SFX-free jazz, fairground-drone? Who knows. That they remain unclassifiable is, perhaps, testament to the achievements that Zinovieff made with his inventions – music is too rarely about pushing the boundaries of what is possible. The only respite comes when, occasionally a human voice breaks through from the cacophony, and is all the more jarring for sounding like something organic – but even here the voices are disembodied, abstract, and incomprehensible, before finally being assimilated into the machine.

The compilation is a magical, musical box (for us mortals science/magic are often indistinguishable), as seemingly from out of nowhere, new worlds are conjured with the opening of each track. What this album touches on – indeed what Peter Zinovieff’s life’s work touches on – is something that drives all of us, musicians, fans, critics alike: that deeply human need, that drive, to hear something different, something new. These pieces sound as fresh, as alien, and at times as discomforting as they must have done when they first poured out of the speakers. An excellent package.