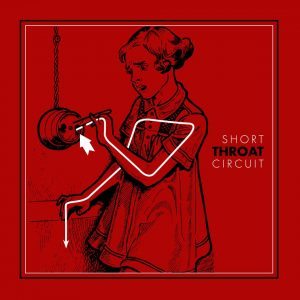 Released on May 29, 2015 via Reptilian Records and Kaos Kontrol

The month of May saw Finland’s Throat return with their next snarling slice of shit kicking, brain mangling aural goodness, titled Short Circuit. This being the band’s 3rd EP after four singles, three splits and an album, it’s safe to say that by this point, they themselves know what they are all about, and it shows.

Upon listening to Short Circuit first time through, you may instantly pick out how directly influenced these guys are by the early Sup Pop / AmRep roster, melding heavy, hammer on style riffs with discordance and big grooves in the same way, but the one thing that ties the whole release together? The 90’s when it was at its finest. Each track welcomes an almost specific and very obvious influence (to my ears), and this is by no means a bad thing. It always sounds fresh, exciting, consistent, and most impressively, like you are always listening to Throat.

Short Circuit gives a serious nod in the direction of Unsane, The Melvins, and (early) Nirvana at various points throughout its 25 minute duration. Commit a little longer though, and the fog begins to clear. The combination of influences mixed with the band’s take on the noise rock sound creates an almost new beast. With repeat listens, I find myself wanting to compare them to the mighty KITTENS, and what could be better than that? Nothing, that’s what.

Opening track ‘Roast’ takes no prisoners as it commences. Razor sharp guitars, molten bass and thundering drums swirl and mould around one another, whilst the vocals snarl and spew over the top to create a whirlwind force of chaos and dementia. And that is just for starters. As the songs progress, so does the weight of the sound, gradually becoming heavier and heavier on its journey through to the end where we get an unexpected  and twisted cover of Björk’s song ‘Unjoy’ to close the EP.

An impressive and “must look into” release for those interested in the AmRep back catalogue for sure. The band are on tour throughout 2015 in mainland Europe. Make sure you check them out if they come by your area. Short Circuit is out now via Kaos Kontrol and Reptilian Records.