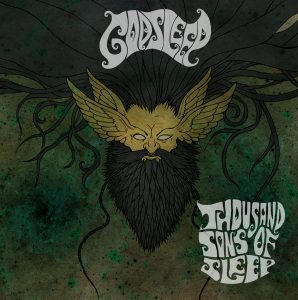 Released on September 18, 2015 via Independent

This description, while extremely enticing, is actually rather misleading and does the band a bit of a disservice as, while they certainly wear their stoner rock influences on their hearts with front man Kostas doing his best gravelled NOLA impression, Godsleep also have a strong desert scene undercurrent. This is amply demonstrated on opening track ‘The Call’ that pretty much drifts into existence, ambling along in its own noodling psychedelic way. The boys from Greece are also in no rush as this opening song takes a good five minutes out of its seven minute running time before any semblance of a RIFF makes itself known.

And while no prizes are being prepared for originality here there is certainly a lot to enjoy for RIFF lovers everywhere, especially when second track ‘Thirteen’ kicks up several gears fuelled by fuzzed up bluesy guitar work that has more in common with the likes of Fu Manchu and Kyuss than Clutch (nitpicking on my part admittedly). Once again it has a longer than average song length (8 minutes here) and the band use the time wisely to explore further afield (if only slightly) on their sonic odyssey.

‘Wrong Turn’ slows down the pace, but keeps the fuzz end up with a lot more of the classy bluesy leads eventually delivering a solid bouncy groove and a collection of attention grabbing RIFFS that build up the energy levels. However ‘This Is Mine’ drops the ball with a distracting similarity to ‘Wires’ by Red Fang, but happily ‘I Want You’ picks it back up with some gloriously filthy bass lines nestled amongst the riffage and even has time for a blues solo at the end.

Final tracks ‘Home’ and ‘Feel Like Home’ return to the chilled out almost psychedelic vibe of the opening track proving circular feeling to proceedings.

Certainly a highly enjoyable exercise in stoner worship in a record that is definitely greater than the sum of its parts.