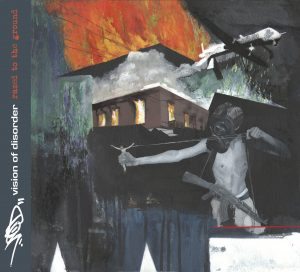 Released on November 13, 2015 via Candlelight Records

It all starts so promisingly, VOD come out all guns blazing with a ferocious ‘Heart of Darkness’ aiming straight for the jugular and picking up where previous album The Cursed Remain Cursed left, amplified with a far FAR beefier and vicious metallic bent rather reminiscent of Lamb Of God in the pummeling RIFFS amongst the traditional hardcore dynamics. The vocals switch between aggressive screech and clean spoken word narrative with post-hardcore mid-section breaking up the rage.

So yes they are angry…very angry!

And there is no letup with ‘House in Sky’, scything RIFFS underpinning hardcore groove, discordant rhythms and post-hardcore breakdowns in a tightly wound four minute burst of fury.

‘Electric Sky’ slows down the pace, but certainly not the intent descending into sludge almost doom territory in places whereas Razed To The Ground ups the ante and the Lamb Of God dosage with a fast and brutal cavalcade of RIFFS, a killer verse and chunky groove to boot, although it does lose momentum in the middle section that it salvages in the end game.

But first ‘Craving’ takes us on spin to hardcore and metalcore neighborhoods, all big grooves, melodic chorus and discordant tempo changes followed by ‘Cut My Teeth’, getting its rumbling metal groove on and further dabbling in clean vocal melodies.

However ‘Red On The Walls’ is pretty forgettable, but thankfully ‘Nightcrawler’ drags proceedings back up the quality ladder with a menacing narrative undertone, which ‘Severed Wings’ maintains with a collection of cool RIFFS wrought around an admittedly average song.

Thankfully Vision Of Disorder end with a bang and not a whimper as ‘Amurdica A Culture Of Violence’ marries hardcore groove with expansive post-hardcore aplomb.

Not perfect as Razed To The Ground does lose steam after a blistering start, but certainly a welcome and refreshing return none the less.