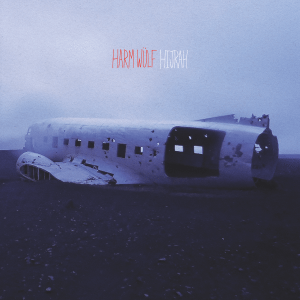 George Hirsch is responsible for driving one of hardcore’s most innovative and consistent projects in the form of Philadelphia’s Blacklisted. It’s no surprise that his soulful and despair-induced energy would channel into a side project, and it stands so far away from the urgency of Blacklisted that it’s commendable that Hirsch adjusts to both forms of his artistry so well. Harm Wülf’s 2013 debut There’s Honey in the Soil So We Wait for the Till, was a bluesy, melancholic neo-folk record buried in cacophonous acoustics and Hirsch’s deep vocal delivery that recited lyrics touching on isolation, apocalypse and death. Not only a refreshing release for Hirsch’s skill set but also on the Deathwish roster as a whole. Hijrah sees the project progressing very naturally; the overall atmosphere that ran through the spine of the debut is far vaster. Bleak landscapes and obscured darkness is what comes to mind during these tracks, again emphasized by Hirsch’s vocal content, collectively delivering a highly immersive listen.

The deep acoustic strumming that was so prominent on There’s Honey in the Soil So We Wait for the Till has been dissected to make room for bleak instrumental space on this follow up record, the feeling of distance and loss is far greater as a result. ‘Descend, I’ve Been Waiting’ wastes no time in displaying the album’s sparsity; a slow piercing guitar melody is carried by a scraping drone before finding the trudging bulk of the track. Wind chimes and distorted chord progressions act as glimpses of elation among the atmosphere’s fog.

The tone is set early on, yet Hirsch is able to ripple the album’s atmosphere with numerous guitar leads throughout the record. Take the gentle, rolling guitar passage on ‘Stray Dog’ that makes for a true moment of beauty and sorrow when considering how cold the production often feels. The constant Neo-Folk presence looms triumphantly as the track ascends with soaring and desperate guitar melodies and marching percussion; Hirsch repeats the line “I am so hateful” as the track wears down, emphasizing one of the many powerful moments that Hijrah houses. The album constantly dwells in the mood it creates, allowing for the tracks to flow seamlessly yet retain their own milestones. ‘Put the Kettle On (They’ve All Gone Away)’ is a prime example, a track that provides the most haunting moments on the record. The eerie opening guitar melody is so desolate yet stunning that it carries the whole track as each verse closes, plunging it further into the dark landscape that Hijrah depicts.

With that in mind, it’s clear what Harm Wülf’s greatest skill set is; writing cohesive and powerful songs that retain impact when immersed in the dark space that surrounds them. Take the beautiful ‘Welcome Home Our Sister’, another patient neo-folk track with heart-breaking chord progressions and a harmonica contribution that provides comfort among the cavernous and more electrified instrumentation. Equally the beauty surfaces through the sorrow on ‘Survivors Guilt’; the slow strumming patterns and chimes that shimmer through the mix really highlight the projects ability to inject moments of allure despite the dark tones.

With only 8 tracks, Harm Wülf has managed to create a vast and gloomy piece that is excellently written and tied together yet spacious enough to keep returning to and appreciating the depth of each track. Hijrah is more evidence Hirsch’s interesting song writing style that is so often overlooked and stands as a quality neo-folk and American record that will undoubtedly be a highlight of 2016.