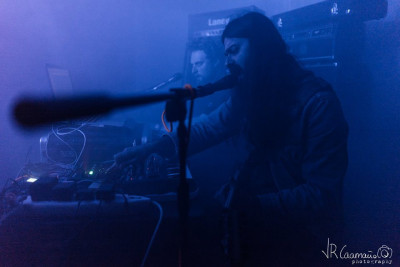 Necro Deathmort have had an amazing year! An album released on Rocket Recordings, a performance at the Electric Ballroom at Desertfest and much much more! They also headlined the gloomiest Cosmic Carnage ever at the Windmill last April. If guitarist, Matt Rozeik is not busy enough with that, he also runs his own DIY label called Extreme Ultimate. Here’s what he thinks about all the stuff that went down in 2016.

I’m good thanks, me old China!

(((o))): Your album came out on Rocket which was a bit of a surprise. They focus on psych and I’ve always thought of you as a doom band. How did it come about?

Rocket were aware of us and we just sent them the album. I guess they are primarily known as a psych label, but I don’t think that label strictly applies to Gnod and Teeth Of The Sea, so they definitely have other strings to their bow. I think people have different ideas about the sort of band we are – while we most definitely have an affinity with doom and play with a lot of doom bands, I don’t think we’d consider ourselves such. I’m not really sure where we fit in to be honest, seems like neither of us have the appropriate haircut or imagery to be considered anything that’s particularly “now”.

(((o))): The new stuff is less punishing and more soundtrack-y. Was this intentional? Is this reflective of the kind of music you listen to now?

I pretty much just listen to Abscess and Hawkwind, so not really – we tend to just make whatever music feels natural to us. Everything we do is pretty much intentional. We’ve been going for 8 years now, it’s only natural that we progress with each release and keep things interesting for ourselves, and I guess mellowing out with age does tend to happen!

(((o))): How was playing the Electric Ballroom at Desertfest? Was it the biggest crowd you have ever played to?

Desertfest is always a blast, whether it’s playing or attending – a total brofest from start to finish and we had fun during our set. We’ve played a fair few shows to larger crowds in the past – Sonar festival in Barcelona stands out as probably the largest crowd, must have been 4,000 people there. I felt like I was in the Kaiser Chiefs: it was an interesting contrast playing some Soho shithole the next week to three people and our girlfriends.

(((o))): It seems to have been a great year for Extreme Ultimate with the release for Bruxa Maria’s debut album among others. How’s it been for you?

It’s been a fun year, though I haven’t been as productive with the label as I would have liked. I still have 4 releases sitting on my shelf that I intend to release this year. The reception to Bruxa Maria has been awesome, and it’s great to see them shining. I think with all the bad shit happening in the world an album of aggy noise rock is probably just the tonic.

I’ve got a tape from Gnar Hest, which is Matt from Team Brick/Fairhorns and used to play in a band with that Jeff Burrows geezer from The Portisheads. I’ve got two tapes ready from Crypticus, which is old school death metal and I’ve got a new project called Basic Vanilla, which is bleak techno stuff. There will also be stuff coming out from Lupins, The Laze, Valley Of Golden Skulls, Leevil, Sagan Megadrive, Bowel, Facial Stance and Bastardhammer.

We haven’t really played a huge amount of shows, so it’s probably a four-way tie between Desertfest, supporting Yob at the Scala, playing to mates in Walthamstow and the recent show we played with Dalek.

I’ve only really attended four gigs this year as a punter that I can remember: Bang! at The Borderline, Silver Apples, Zoltan and Autechre last week. All four gigs were rad in very different ways.

Desertfest was definitely a lot of fun, and we caught up with a lot of mates – Oranssi Pazuzu smashed it on the Sunday. I went to my mate’s festival Metalbrew in High Barnet, which was a lot of sitting around on the grass in the sunshine drinking beer and feeling generally “relaxed”.

If Nitkowski actually manage to release their album before this is published, then assume that’s my favourite album of the year. Other contenders would be:

We’ve just finished recording our new LP, which we are very much looking forwards to everyone hearing – it’s a bit of a unique beast and might surprise some people. We’ve done some production work for an artist that will come out next year which we annoyingly can’t talk about yet, and we’ll most likely release an album of jams and improv stuff from our archive. I’ll likely pump out some Basic Vanilla stuff with scant regard to quality control or public demand. I think we’ll try to do a tour as well, depending on when the album comes out. I’ll also be launching my own brand of scented massage oils as well, so look out for that.